Gokul Krishnamoorthy
Share on FacebookShare on TwitterShare on LinkedIn 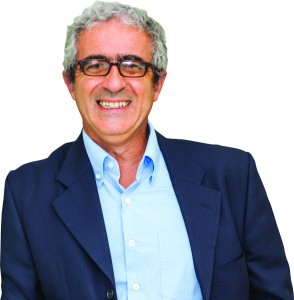 When Yves-Michel Gabay wanted to move to an international assignment from his base at MEC in France (then Mediaedge: CIA) over nine years ago, he told his then boss. But he hadn’t guessed that three weeks later, the option suggested to him would be a position in Dubai. He confesses, that at the time when he was one of two MDs in Paris, he had only a rough idea of where Dubai was on the world map. After an exploratory trip and meetings with current MENCOM chairman and CEO Joseph Ghossoub and MEC MENA CEO Mohan Nambiar, he moved base. In the very first meetings, Gabay recalls Nambiar telling him, “We’ll do whatever you want to; but it may take time.” For the first six months, he was on the payroll of MEC Paris. He has stayed on in Dubai ever since, and hasn’t found a reason to regret the decision.

Looking back, the media veteran who started off in the industry in 1982, recalls the unit as a very strong media buying set up in the UAE. What started off as the media department of Y&R Advertising (then Team Y&R), has come a long way. His mandate, broadly, he recalls, was to help Ghossoub and Nambiar build the full service media agency MEC.

The decision to move for good was encouraged by his experience of Dubai in the first six months. On his first trip, he recalls having spent four hours in a taxi.

“I was excited, because I felt the beat of the city. I was amazed to see such a lot of development all around, a lot of work in progress, 24×7. Yes, I was culturally concerned before I came in. But it was not that difficult to adjust. Everyone is here to make it happen. Everyone is positive. Dubai is a special place. For someone looking for a new challenge, even back then, Dubai was a great place,” recalls Gabay, now GM for the MENA region at MEC.

Even before he came in, the agency had some firsts to its credit. Gabay points to the first ‘road block’ in the market, for Colgate, for starters, followed by a take over in newspapers for a mobile handset brand. The task in the early stages was quite clearly cut out.

“I suggested that we create specialisation. I was shocked by the absence of experts. One planner did everything – TV, print, radio, OOH, etc. With the number of channels and print players, we needed specialists,” says Gabay.

Over a period of time, the core team, which has grown since then, built a TV planning department, digital (Interaction), Access (for sponsorship, product placement, on-ground, sports, etc.) and A&I (analytics and insight).

More recently, Gabay claims that working closely with MEC UK, the agency brought Shazam into the market, with work for brands Jaguar, Land Rover and Nestle.

He reflects, “This (Dubai) is a place where nothing is impossible. You always come across people who will say, ‘Why not?’”

In October 2008, the WPP agency’s global CEO Charles Courtier visited Dubai for the first time. The current MENA GM explains how he had warned the team here, of how bad things were going to be, referring to the looming financial crisis.

“Here, we didn’t feel anything until then. People were still asking, ‘What’s the crisis?’ Because they warned us, we started to be really cautious. The crisis hit in December 2008. When a storm is coming, you have to reduce the size of your sails. We did that, and therefore didn’t have to make a severance,” he recounts.

Yet, the agency had to let go of a small number of people – not more than 10, he emphasises. And MEC Dubai did not replace those who were leaving.

Pointing to the positive impact of the crisis, the media man says, “Until 2008, some advertisers were just splashing money, not viewing them as investment. Then, they started asking question, forcing media too to be more professional.”

The slowdown, he adds,  cleared the market of ‘the bad players’. The period also forced the balance of accounts to be consciously changed. Where 35 per cent of the agency’s billings came from real estate and financial institutions earlier, the move was to skew towards less risk-exposed clients. Gabay credits this as the first result from having a dedicated TV planning and buying department, that allowed better deliveries in categories like FMCG.

“We were also lucky. Even in the real estate category, we had the best clients. We still have EMAAR. Even in the worst of times, they have been solid. They never left us with a bad debt,” he reveals.

The agency also relocated people to places like Oman, Bahrain and Qatar, which were not impacted as badly. Things started to ‘return’ in 2012. At one point sometime in 2009, the Dubai floor was down to just over 90 people. It’s now back to over 160.

The agency GM notes that when he moved into the market, media buying units were buying prime time, and getting day spots for free. So he wondered, if one had to only look at day slots, how one would go about it. Among other things.

The modus operandi involved identifying one person who ‘loves crunching TV’ – Bhaskar Khaund, now regional TV director for MENA, was sent to London. The agency also asked for others who were interested. Current trading director for MENA Nidel Chamoun was among them. More people were brought in.

“We improved incrementally on the product. We did some studies, specifically on viewing around Ramadan. The most important thing was to change the way of thinking TV,” says Gabay.

Currencies like cost per GRP followed. The MEC head credits the market with understanding the concept quickly – that it was not the number of spots, but the people viewing them.

This leads to an inevitable discussion on the subject of costs. Ask Gabay about the accusation from media houses that agencies are not appreciative of costs incurred in creating better content, and it evokes a considered, yet swift, reply: “The problem is about what the currency is. If you increase the rates with no rationale, then there are bound to be questions. If you say you are increasing the cost of a page because the cost of producing it has gone up, then my question is simple. What are we buying? The page or the readers? Sellers need to understand that we are not buying the space; we are buying the audience.”

Add a pitch situation or a budget squeeze, and the pressure to justify costs will be even higher, he reasons. He points to markets like the US where ‘TV optimisers’ have taken over from TV planners, and the price of spots change everyday, to underline that the planner will have to stick to the GRP.

“Price of spots change everyday in the US. The next move will be to real time; programmatic will come on TV,” surmises Gabay.

The subject of procurement and media audits has been at the forefront of discussions. According to the MEC hand, it’s not all that bad. He notes that the MENA market is just maturing, pointing to the fact that procurement has been around for a while in mature markets like Europe.

“Having a smart procurement team involved is sometimes a good thing. In big pitches, it is a media auditor. We know that it is easy to make the figure say what you want. We know that even if the client is not a media specialist, their auditor can compare apple to apple. We are seeing professional media auditors in the region. Ten years ago, we had people flying down who knew nothing about the market. That’s not the case today,” he elaborates.

A good year, road ahead

Media planning and buying still accounts for 80 per cent of net revenue for MEC MENA today, but the newer streams are growing. The agency’s billings rose by US $130 mn in 2014, according to IPSOS figures (gross billing). This was through account wins of Vodafone, Samsonite, Bank Al Etihad, National Bank of Oman and Banque Misr, among others. The agency’s lone account loss was that of Burjuman Shopping Mall.

The mandate for Vodafone kicks in for the year 2015. Of the 14 offices of the agency, the one in Cairo, says Gabay, has been ‘rejuvenated’ in the last couple of years. Between October and December 2014, the agency brought on board 13 people in Cairo.

Among first places the agency is looking at, depending on the embargoes and how the political situation evolves, is Iran. The other market is Syria, where MEC was present through a partnership and would be keen to reopen ‘one day’.  In North Africa, MEC shut shop in Algeria but is working for clients in that market through an affiliate in Tunisia. A solution might just be found through GroupM, says Gabay.

In 2015, he points out that there could be more synergies evidenced in the region thanks to GroupM entities working with each other closely. The pursuit of integration is a given, as is a deep dive into big and smart data and what it can do for clients.

The MEC MENA GM adds that if the biggest development of the last 10 years was in digitalisation followed by mobile, now it is the content wave that agencies must ride. This WPP agency wants to be ready for the ride – as a ‘content factory’.

(This article appears in the issue of Campaign Middle East dated 25 January 2015.)