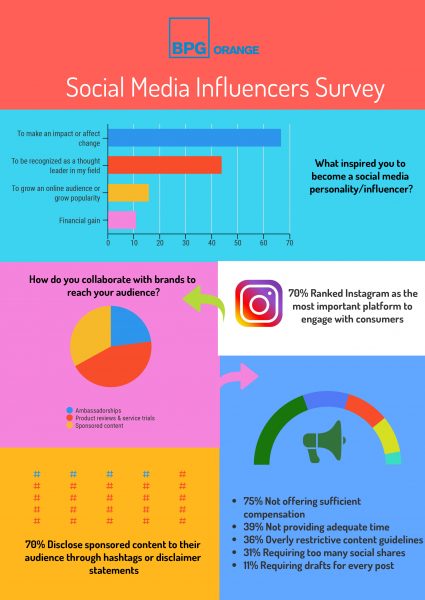 Following two surveys by BPG Orange which analysed brands’ and consumers’ perception of social media influencers, BPG Orange has turned the spotlight on influencers to understand what drives them to engage with brands in the UAE.

Part three of the influencer survey revealed that a majority of influencers (67 per cent) were inspired to become social media personalities to make an impact and drive real change in consumer behaviour and attitude in the UAE. Only 16 per cent of respondents cited that they became influencers to grow their online popularity and a mere 11 per cent said they did it for financial gain.

One of the respondents offered a candid view: “I didn’t plan to become a social media influencer – it just happened by itself. As the organic following started to grow, I felt compelled to be able to make a positive impact and inspire people to make healthier, informed and more self-confident changes. It should never be about ego, popularity or financial gain.”

This throws up a very important question – do influencers disclose sponsored content to their audiences? An overwhelming 70 per cent of respondents said that they chose to disclose this to their audience through hashtags or disclaimer statements.

Influencers revealed in the Survey that they also face challenges in their collaboration with brands. Insufficient financial compensation topped the list of challenges followed by tight timelines and overly restrictive content guidelines.

Taghreed Oraibi, BPG Orange PR Director: “The most surprising finding from this survey was the challenge influencers face in regards to financial compensations as we have witnessed an increase in client budgets to accommodate influencer marketing campaigns. According to our previous influencers survey, 43 per cent of brands indicated that they had spent anywhere from between US$1000-10,000 per social media influencer campaign in the UAE.”

When it comes to compensation, a majority (76 per cent) of influencers said that they accepted payment through free products or experiences, while 66 per cent said they charged per post or video.

The most significant metric of success for influencers is the number of comments and interactions (85 per cent), impressions (72 per cent) and re engagement from brands on additional assignments (71 per cent).