Avi Bhojani: “We need to define who we are” 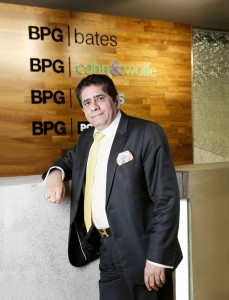 If you are not already heading up a vertical division of a marketing and communications holding group, imagine for a moment that you are. You open up your Outlook to find the group CEO has invited you and your counterparts to a meeting. There is no agenda, only a title: “The Inevitability of Extinction”. Worried yet?

That is the invite that pinged into the inboxes of business heads and their top lieutenants at BPG Group in May last year. The man who hit send is Avi Bhojani. With 18 of his top management in the room, “it started a little negatively”.

Bhojani believes the best days of the media and communications business will soon be in the past. This could happen in a year, or it could happen in five. “The industry is going through a very, very dramatic change,” he says.

“The industry model is being reinvented,” he continues. “The archaic model was started in 1874, as an advertising agency getting 15 per cent in return for booking space in media. That’s where it started, but today the media business has become disaggregated from that and some people are finding it difficult.”

That includes BPG. “As a professional services firm we have to contend with costs going up,” he says. “Costs of operations, indirect costs – from visa fees to trading licence fees to staffing fees. And accountability on revenues is significantly higher; every marketer wants the maximum bang for his buck. Everyone is talking digital, but other than, for example, Google, Facebook and a few others, when there is a semblance of a revenue stream in digital everyone is scratching their heads for how to pay for the time that is spent strategising on and executing that.”

At that meeting Bhojani emphasised that without change the existing media model would become redundant. A year
later, he says BPG is “actually brilliantly positioned”.

“The problem that most people are facing is rightsizing and realigning,” he says. “In terms of client-facing, BPG Cohn & Wolfe is a different entity from BPG Bates, but we have one profit and loss (P&L). So we are able to move resources. [For example,] the public relations practice at Cohn & Wolfe and the media practice of Maxus are able
to collaborate brilliantly.”

He gives examples of collaboration between media client Twinings, which Maxus won earlier this year. The tea brand is now talking to BPG’s PR division, Cohn & Wolfe. And another recently won Cohn & Wolfe client, HMD Global (the company that has licensed the Nokia mobile phone brand) is discussing a corporate social responsibility project with BPG’s digital and advertising divisions.

BPG has been “de-layering”. “With 20:20 hindsight perhaps we overdesignated our business heads to CEOs,” says Bhojani. Now, since BPG Bates CEO Nick Clements left at the end of last year to become chief operating officer of recruitment and talent company MCG Group, the advertising agency is headed instead by a managing director, “which is much more effective”.

Instead of business unit CEOs, BPG is now steered by top-level group strategists, led by strategy director Kevin Jones. This structure allows and encourages cross-selling to clients such as Twinings and HMD. Bhojani is even considering putting together a cross-vertical client team for a large bank, along the lines of Team Air, which WPP services Emirates with. “I don’t want to take royal glory, but we are a mini WPP in operation,” he says.

In fact, WPP holds a minority stake in BPG Group. While Bhojani hints Sir Martin Sorrell’s UK-based holding group might up its investment to become a controlling shareholder, he won’t discuss any potential timescale for such a move. At the moment, holding WPP brands but retaining control works well. “The chances are if we were majority owned, Maxus would get gobbled up by Group M, the chances are Cohn & Wolfe would want its independence,” he says. “They are all WPP, but that’s where I have to strike a delicate balance.”

WPP management is driven by what the UK holding company calls short-term incentive plans. “Each regional or global CEO is driven by the value that they create,” says Bhojani. “We have been able to ensure that the Cohn & Wolfe EMEA team gets numbers from [the group], as with the Maxus EMEA team.”

The time has come for consolidation, though. “We are structured for collaboration,” he says. “The biggest impediment to collaboration across functions is the human need to own a relationship. It’s there in all of us. I want my wife or my husband. The client is mine.”

Remuneration is less important to us humans than this desire to own the relationship. “Financial rewards and other things are secondary,” says Bhojani. “None of us does everything with a financial objective in mind. At the end of the day, pride, ego, the feeling of goodness, the feeling of achievement: those are intangibles that are far more important at times.”

It is never possible to remove those factors altogether, to allow completely smooth collaboration, but that effort is “a work in progress”.

The meeting in May began a process to reposition BPG as “the group for change”, says the CEO. “We are change agents.” The internal process began in earnest in January and is ongoing. It involves instilling project management capabilities, and instituting a Change Agent of the Month award across the business. “This is hardwiring our culture,” he says.

“I’m a strong believer that a motivated team of average talent can deliver incredible results, provided the right enabling environment is there,” says Bhojani. “A team of stars almost invariably creates a disruptive and divisive situation. Ideologically, that latter is capitalism and the former is communism, but the reality is that there is a middle ground where you reward high performance but that is relatively transparent.”

Bhojani is steering BPG Group away from a “service orientation”, he says. “One of our core values was ‘Can Do’, and ‘Can Do’ got interpreted as: don’t ask any questions; the client has said do it, so just do it. So we started becoming very mediocre,
we started defining our key indicator as pandering to the client’s whims completely.”

This stripped BPG of its raison d’être. “At the end of the day we are advisors,” Bhojani says. “What we are also doing is
trying to build points of view. Now I’m questioning, on every account, what is our point of view on this brand, or this market, or this business?”

In some ways this is a return to BPG’s roots. The group was once heavily involved in the development of Dubai government initiatives including Dubai Media City, Dubai Shopping Festival and Global Village, and has worked on public advocacy and anti-insurgency messaging in unstable markets such as Iraq.

So is extinction inevitable? BPG Group doesn’t look like it will join the dinosaurs quite yet. The meteor storm of social media, breaking silos, economic downturn and rising costs might be threatening media and marketing agencies as a species. But Avi Bhojani is leading his network out of the primordial swamp the industry has swum in since the late 19th century. BPG is evolving, and it is winning clients. Twinings and HMD Global came on board earlier this year, and just this month BPG Bates announced it has won Home Box, Landmark Group’s home furnishings brand. Extinction is no longer inevitable. But change is.