Founder and chief creative officer of do epic sh*t, Ramzi Moutran, shares the experience of a day in the life of a D&AD judge... It’s a wrap from the jury at D&AD 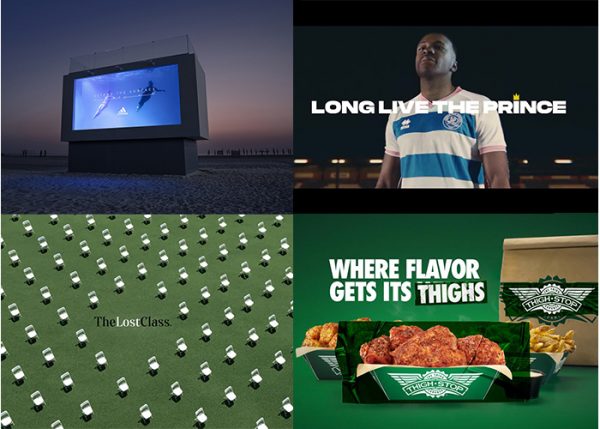 With the 2022 D&AD pencils awarded & announced, teams & agencies well into their celebrations (maybe even a few disappointments) it’s a great time to reflect on what made this year’s awards so outstanding and what we’ve learned to keep us hungry to move forward.

There were 4 incredible pieces of work that truly stood out for me – and no, they were not all yellow pencil winners. Working backwards here are my favourite entries, the insights into what made them so brilliant and why they were awarded a D&AD 2022 pencil – or 12!

The Liquid Billboard is an incredible idea, perfect for the Middle Eastern market.

Confronting head-on how uncomfortable women are about swimming in public – not only globally but substantially more so in the Middle East – Havas ME created a swimmable billboard on the beach of Dubai to encourage women of all shapes and sizes to ‘dive in’.

Liquid Billboard is definitely one of the bravest ideas to come out of the region. The idea worked incredibly well given its honesty & authenticity that reflects the brand, its simplicity, focus, execution and the deep insight into the barriers within the sport – all which creates the true purpose for the campaign.

Winning 3 pencils and making 2 shortlists, the Liquid Billboard campaign subtly yet confidently showcases Adidas’s swimwear ranging from their everyday collection through to swimsuits for women of faith. Even though similar billboards have been created before and the idea didn’t change the world, in my opinion it is still one of the best ideas of the year.

Oh how I love this idea. I’m surprised this campaign didn’t win more.

Wingstop is a very famous chicken wings, fast-food chain. During covid, they experienced many issues (like all of us) but most noticeably, the shortage for wings in their supply chain!

Realising they needed to do something fast, Wingstop literally repivoted their entire brand to get even the most devoted wing-lover converted to the thigh.

Changing everything from their name to their packaging, Thighstop was born.

This is an ingenious response to a global crisis, one that we can all extract learnings from. This took guts, imagination, creativity and a very trusting client / agency relationship. I truly love these type of ideas where business and creative merge.

It’s no wonder Thighstop won 3 pencils; 1 in the PR category for reactive response.

The Kiyan Prince Foundation is a charity set up to promote the awareness around knife crimes in London schools. It was founded after Kiyan Prince, recognised at 15 as a rising star destined for a professional football career, was fatally stabbed outside his school gate in London.

Fifteen years on, the Engine Group London worked with the Kiyan Prince Foundation, FIFA 21, Kiyan’s parents, ex-coaches and ex-players to create Kiyan’s character, estimating how his skills would have improved had he not lost his life.

Using the world of gaming as a platform to speak to a generation where they spend most of their time, this is a beautiful example of how collaboration, technology and insight can truly bring meaning to the world.

As a part of the campaign, JD Sports joined the conversation and for the first time in history, a deceased person’s character became the face of their campaign.

This idea ticks all the boxes for me and is an idea I am completely jealous of, in a good way. Long Live the Prince won a total of 4 pencils and 2 shortlists.

And here is my ‘WOW’ factor.

Change the Ref is a charity that raises awareness around mass shootings through strategic interventions with the aim to influence the NRA (National Rifle Association), on a federal level. Days after (another) recent shooting in America where 19 children & adults were fatally killed at a school, The Lost Class wins 12 pencils (two of them black pencils “WOW”) and a remaining 7 shortlists.

Creating a fake school called the James Madison Academy, based on your second amendment right to keep and bear arms, Leo Burnett Chicago created a graduation for 3044 students who would have graduated, had they not lost their lives to gun crime.

Inviting the ex-president and current board member of the NRA, along with other high-profile advocates of weapons, to speak to the students who would have graduated in 2021, this is the single most powerful execution I have seen in a very long time.

Everything from the insight, incredibly risky, brave and seamless execution that is fit for purpose right through to how they coax the speakers who are 100% pro-guns to speak to 3044 empty seats, this idea is nothing short of genius.

From the idea to the logo development & website, to the way the films are directed and how the ideas were entered into multiple categories. This is the epiphany of D&AD standards.

It goes without saying I am completely jealous of this entry. But most importantly, it has truly inspired me and I cannot wait to get back to my desk to start to create some amazing work!

of do epic sh*t @RamziMoutran on being a D&AD judge. Find part 1 here and part 2 here.