We Are Social promotes key members to regional leads 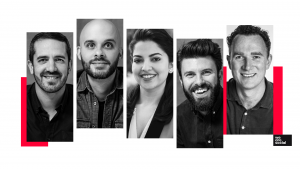 The new structure will allow greater collaboration across the network, building on the successes achieved by local leadership over the last few years. In these new positions, the individuals will work closely with Chris Adamson, global COO, to support local management to deliver the agency’s global vision and strategy, promoting further growth in the different markets. They will also support growth and collaboration within Plus Company, the alliance of over 20 creative, media, and PR agencies, which We Are Social is a part of.

Akanksha Goel is now regional lead for the Middle East and India, and vice president, Plus Company taking on these responsibilities alongside her role as founder and CEO at Socialize. In her new position, she will support the local leadership team, tackle regional challenges and identify opportunities across borders. Of the appointment, she says: “Joining forces with We Are Social’s global network, has cemented Socialize’s competitive advantage in market & allowed us to deliver even greater value to our clients. I’m so excited to embark upon this new role, further strengthening connections between our offices and driving the network’s growth story within the region”

Gabriele Cucinella, Stefano Maggi and Ottavio Nava have been promoted to Regional Leads for the EU Area, and senior vice president, Plus Company, alongside their roles as co-Founders and CEOs of We Are Social Italy and Spain. They will support We Are Social’s local leadership teams across Italy, Spain, France and Germany. They explain: “Across the We Are Social network, there is such a wealth of talent and expertise combined with a deep knowledge of local culture. This new broader perspective will allow us to improve our ability to gather all this and channel it in ways which help brands grow their relevance for the audiences they want to reach, both at local and European level”

Jim Coleman has taken on the role of regional lead for the UK and North America, and senior vice president, Plus Company, alongside his existing responsibilities as CEO of the agency’s UK operations. He is tasked with supporting We Are Social’s leadership teams in London, New York and Toronto. Jim says: “We’ve scaled really quickly over the last decade to over 1,100 people from a standing start. As we continue to scale and expand we need to take what has worked well across the globe and identify opportunities to deliver world class work across the whole North America region.”

Nathan McDonald, We Are Social’s co-Founder and group CEO, concludes: “These promotions recognise the major contribution these individuals have made to our growth and success over the last decade. I’m excited to see how their partnership with our local leadership teams will build on the amazing work we are seeing in each of these markets.”