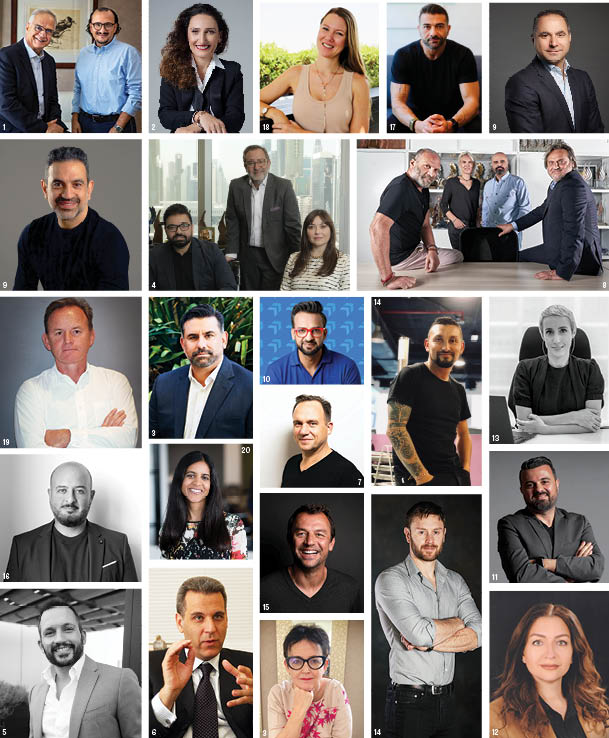 2 In June Omnicom Media Group MENA announced the promotion of Elda Choucair from COO to CEO. The previous CEO, Elie Khouri, will now concentrate on his role of chairman.

3 In January Ogilvy announced that David Fox would assume the role of CEO for Memac Ogilvy in the MENA region. Based in Dubai, Fox will lead the creative and strategic regional agency powerhouse that counts 11 agencies in nine countries. The move to a new regional position follows six and a half years for Fox as CEO of Ogilvy Australia, having spent 10 years in global client roles with Ogilvy in London. Fox’s predecessor and long-serving senior Ogilvy executive Patou Nuytemans, was promoted to global chief growth officer, growth and innovation for the global creative network. In September Ogilvy announced that Nuytemans would assume the role of CEO of Ogilvy EMEA, taking over from Paul O’Donnell, who will continue as regional chairman and partner.

4 In August Impact BBDO announced the appointments of Syed Azeem Afzal as CEO of Impact BBDO Dubai and Samantha Stuart-Palmer as COO. They will work with Dani Richa, group CEO of BBDO MEAPAK.

9 In October it was announced that Chadi Farhat, chief investment officer of Omnicom Media Group MENA, would be leaving the company at the end of the year to pursue new opportunities. Wissam Najjar, currently chief operating officer of OMD MENA, will now take on the role of COO at OMG MENA.

10 In February in a bid to drive its business globally, ArabyAds appointed Gulrez Alam as chief investment and strategy officer to be based out of UAE. Alam has nearly two decades of experience across the USA, APAC and the Middle East, and has been a successful entrepreneur who founded Resultrix, a digital marketing company, in 2008, which Publicis Groupe later acquired.

11 In March TBWA\RAAD announced the appointment of Joe Lahham as its managing director. Lahham will be leading the Dubai operations of the agency and will continue to report to Reda Raad, group chief executive officer of TBWA\RAAD.

12 In March UM announced the appointment of Rasha Karim as managing director, UM Egypt. She joins UM with a strong track record in organic and new business growth, having worked with a vast portfolio of global clients such as P&G, Nestle, T-Mobile, Microsoft and Jaguar Land Rover, as well as having led media for Vodafone Egypt.

13 In August UM appointed Maria Poulton as managing director, UM UAE. With a renewed approach to talent and an operating model that intends to “flip the legacy model on its head”, UM says it is “looking through a future-facing lens” at some of the cultural and ethical issues affecting the media and advertising industry today.

14 In April TBWA\RAAD announced the appointment of Jim Robbins as its new executive creative director. In September the agency announced the promotion of Alex Pineda to the same title. Pineda, who has been part of the company for more than seven years and previously held the role of creative director, will be co-leading the agency’s creative workforce and output with Robbins.

15 In April Philippe Berthelot was announced as the new managing director (MD) of Grey Dubai. He joins from Entourage Middle East, where, as MD, he oversaw the integration of that agency’s marketing solutions and the global development of EVE, the first 3D virtual events platform in the region.

16 In December Grey Group announced the appointment of Pablo Maldonado as the new ECD of Grey Dubai. Maldonado joins from Wunderman Thompson Dubai, where he spent the last few years repositioning the agency in MENA and was most recently the ECD.

18 In May Alanna Turpin was promoted to director of sustainability and culture at Omnicom Media Group MENA. In this new regional role, she will propel OMG MENA’s culture whilst building on strategic sustainability and corporate wellness initiatives across the group. She will lead on employee engagement programmes and internal communications, and support on the renewal of various talent management processes to enhance OMG’s employee offering.

19 In July Wunderman Thompson announced that Paul Shearer has been appointed global creative client leader, with the title CCO global clients. Shearer joins from his role of CCO of Impact BBDO, where he was based in Dubai.

20 In September Faisal Al Ayyar, chairman of OSN (Panther Media Group Ltd) announced that Sangeeta Desai has been appointed as interim CEO. Desai had served as a non-executive director on the board for more than a year.