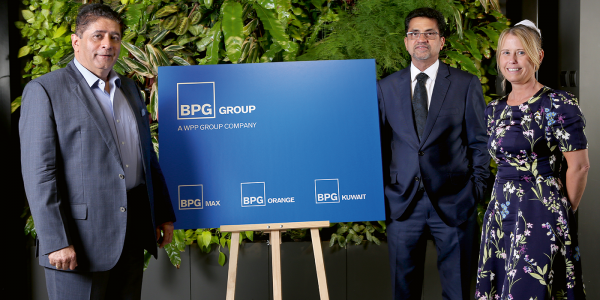 As of July 1, Dubai-based communications group BPG will change.

Gone will be ad agency BPG Bates, PR agency BPG Cohn & Wolfe, digital asset creation shop BPG Possible and media unit BPG Maxus. Instead, the network will rebrand its PR and advertising under one title, BPG Orange.
Its media agency will become BPG Max. A separate, geography-specific unit, BPG Kuwait, will be the third entity sitting under the umbrella of the BPG Group.

The old names are all ones the Group’s agencies had inherited from WPP, which
is a 40 per cent shareholder in BPG. “In a funny sort of way, or for want of a better definition, we became a little mini WPP,” says BPG Group CEO Avi Bhojani. “Our advertising practice was Bates, our media practice was Maxus, which was part of Group M. … Our PR practice became Cohn & Wolfe … and digital assets was Possible.”

The Kuwait unit of the group will continue to operate as a stand-alone entity, as it is a 50:50 partnership with MH AlShaya & Co, one of the largest retail operators in the region.

The restructuring announcement comes a year after it was revealed that Maxus, a WPP brand, and fellow Group M agency MEC were to merge. The two became Wavemaker in most markets, but BPG, where WPP is a minority shareholder, kept the Maxus brand in the Middle East. Earlier this year WPP announced it would also be merging its PR agencies Cohn & Wolfe and Burson Marsteller. The latter operates in the region as Asda’a Burson Marsteller.

BPG Max will be headed up by Satish Mayya, formerly head of BPG Maxus. BPG Orange will be headed by Fiona Quinn, who has moved to Dubai from BPG’s Kuwait operation. BPG Kuwait will be led by Souhail Arabi. Sunish Menon, who had previously been managing director of ad agency BPG Bates, will assist BPG Max CEO Mayya, and Kevin Hasler, previously managing director of PR agency BPG Cohn & Wolfe, will work with BPG Orange CEO Fiona Quinn.

The restructure has been under consideration but on hold for a while. It was initially due to be rolled out at the start of the year, but Bhojani decided it might be better to take a more reactive stance to dropping BPG’s WPP brands. However, since then the news out of London has included the merger of Cohn & Wolfe with Burson Marsteller, and the departure of WPP CEO Sir Martin Sorrell himself.

Bhojani predicts that once WPP has found a new CEO to replace Sir Martin, who was abruptly pushed out in April, “the writing on the wall” points to WPP selling some of its interests.

“I personally believe that the moment the music settles down on who the new CEO is going to be … whether it’s Mark Read [WPP’s joint chief operating officer and interim boss] or a new person, one thing that will happen is, whether you like it or not, there is going to be selective divestment.”

This would potentially give BPG the chance to buy back WPP’s stake, which Sorrell’s company has held since it bought Cordiant in 2003, the holding group of Bates Worldwide.

In the short-term, the move means the group is becoming less siloed, with PR practices working with digital working with creative. If this sounds a little familiar, with a hint of Deja Ogilvy, Bhojani, acknowledges that.

“Our model change is pretty similar to Ogilvy,” he admits, but quickly adds: “Not because I started my career at Ogilvy in Mumbai. To me that is my home in some ways. Confessions of an Advertising Man got me from business school to advertising.”

Last month Ogilvy, also a WPP company, announced a global shake-up it described as a “re-founding”, where it has rolled its silos – including ad agency Ogilvy & Mather, customer engagement specialist Ogilvy One, and Ogilvy Public Relations – into one entity simply called Ogilvy, with a single P&L.

As with Ogilvy, WPP is a shareholder in BPG. But unlike Ogilvy, and most of its other agencies, that shareholding is a minority. Bhojani owns 20 per cent of the company, and local businessman Abdullah Al Ghurair owns the remaining 40 per cent.

This means that while WPP can have a say in how the company is run, it cannot dictate it.

Bhojani says: “WPP still has its holding. On record, I have told WPP that as a minority shareholder you can express a point of view on the commerce, but not on the branding.”

The move to consolidate BPG’s skills under fewer umbrellas also echoes the development of WPP to reconsolidate lots of its offerings. The merging of agencies and the restructure of Ogilvy are part of a tendency towards aggregation and consolidation, says Bhojani.

WPP was bought by Sir Martin Sorrell in 1985 as a shell company he could use for acquisitions. He bought up advertising agencies and began breaking them up into separate creative and media-buying units. Bhojani says the advertising industry’s old model broke two decades ago when the media became disaggregated. “The media companies made a lot of money,” he says. “In the ad agencies it started going down. The value for the ideas started diminishing. That coincided with procurement taking over decisions.”

Bhojani describes the traditional agency model as a “buffet service”. The thinking was: “Let the client eat as much of your time as they can, because what you lose on the straights you make up on the bends, and you looked at the long-term relationship. That got changed with short-term procurement models; the whole model was changing.”

WPP led this charge, but at the same time, in recent years has been pulling together its disaggregated offerings and reaggregating them into service units for big clients.

WPP and BPG are far from alone in this thinking. Publicis has its Power of One philosophy, which also involves different agencies and practices working closely together. In the region, holding companies such as the Interpublic Group of Companies-aligned Middle East Communications Network have strived for some years to coordinate their offerings.

WPP’s own attempts were what Sorrell called “Horizontality”, but Bhojani says the philosophy was essentially flawed.

“The fundamental challenge of Horizontality – and why Power of One has worked better than Horizontality – is that in Horizontality, incentives were not aligned,” says Bhojani. “So if JWT referred a piece of business to Hill & Knowlton, for example, they wouldn’t get a penny out of it. Publicis did a smarter thing on that; they made sure that interests were aligned, because if your interest is not there, why would you do it?”

He adds: “At the end of the day, what differentiates JWT from Ogilvy? Culture. Horizontality does not take culture into account. Just as you may like red and I may like blue, if you painted everything black neither you nor I would buy it.”

While much of the holding company streamlining that has happened in recent years has involved back-office efficiencies, Bhojani says that even this should be approached with caution.

“They are trying to aggregate back offices, and it makes a lot of sense,” he says. “But at the same time, what is back office? Accounting services, yes, but HR is part of culture-building.”

As the industry continues to mutate and evolve at an ever faster rate, every agency, network and holding company will face its own challenges. Bhojani’s bet is that a nimbler, more agile BPG, unshackled from the manacles of WPP legacy brands, will better be able to keep up.