Good times ahead? Directors’ collective launched in the Middle East 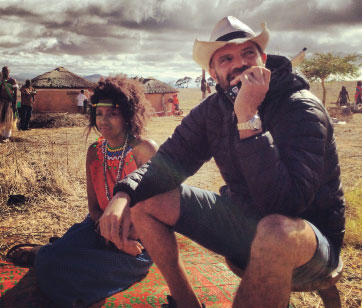 A new directors’ group has launched in the Middle East. Iain Akerman caught up with one of the founders, Ali Ali, to find out why

If you’re going to launch a new concept in the Middle East, you might as well do it when the entire industry is focussed in one place – the Dubai Lynx. Hence the arrival of Good People.

Whether it is the Middle East’s first ever directors’ collective or not, its launch is certain to ruffle feathers. You don’t say the production industry is tired and old and deeply flawed, and expect to get away with it. But then again, Ali Ali never was afraid to speak his mind.

“There are several reasons I could offer as to why we’re launching Good People. All false,” says Ali, one of the company’s founding fathers. “The truth is, it’s time we had a place we called our own. I’ve spent most of my directing career in conflict with production. I struggle and fight to push them into making a better film, while they just want to save money and be lazy. In the end, they end up hating me, while my film goes up as the first spot on their reel. It’s the story of my life. The sad truth is that production has become very old and tired in the region. Most production houses have been around for over 20 years now and were started by producers who cut their teeth shooting dandruff and detergents for P&G. Television around the globe has come a long way since then, but sadly, our production model has stayed the same. And you can’t produce the kind of work we do using that dated Procter method.

“Good People is here so that we can work with like-minded people in a like-minded environment. That’s why we started it really – to be building our own reel, rather than someone else’s. To give these talented directors a place that understands what it means to do good work.”

Those directors include Maged Nassar, Ali’s long-time partner in crime, and Ahmed Hussein, Mohamed El Zayat and Tameem Youness. Together with producers Michel Abou Zeid and Cynthia Chammas they have formed Good People, which begins life with an office in Beirut. A Cairo operation will follow in six months’ time to cater specifically to the Egyptian market.

Ali, of course, needs no real introduction. He is one of the region’s most awarded directors with myriad accolades to his name including a D&AD yellow pencil for direction and a gold Lion at Cannes. For him, the model supplied by the likes of MJZ and Sonny – where directors are associated with specific production companies – is the answer to a flawed regional production industry.

“I’m hoping it will introduce this great model to the Middle East,” he says. “A model that seems to work everywhere in the world but here. I only bid on the same job with several production houses when in the Middle East, which never made any sense to me. Everywhere else in the world directors are married to production houses. You want Tom Kuntz, you call MJZ. You want Ivan Zachariáš, you call Stink. Take me for example. I’m with Sonny in London, Reversal in France, Assembly in Ireland.

“There’s a lack of integrity and a lack of quality when a director is not tied to his or her production house. And that’s why there are no brands in production when it comes to our part of the world. This model actually yields better work because in return for the loyalty of the director the production house supports that director blindly, giving them all the support they need. Because if they didn’t believe in them, they wouldn’t have signed them in the first place.”

It is the second time that Ali and Nassar have formed a company together. They previously founded Elephant in 2008, which went on to become one of the most awarded ad agencies in the region. It was shelved when Ali quit agency life to become a full-time director in 2012, but is remembered fondly.

Ali readily admits that those who have formed Good People have done so for selfish reasons – namely to do things on their own terms – but it’s for a legitimate reason, he insists.

“I think the region needs Good People now more than ever because ideas and concepts are now way ahead of production in the Middle East,” he asserts. “The creative department has surpassed the production department. It’s actually production that is holding us back. You have a lot of creatives out there who have great concepts, but struggle terribly when trying to get it done. You can always spot those good ideas gone bad on television. I think it’s time someone challenged the status quo and gave creativity a chance. It’s time for a production house that listens to the creative before it listens to the client.

“We want to work in the best environment with good people and do good work. That’s all really. We want the work to send the message, as it has always done for the last 10 years.”

A graduate of the Academy of Fine Arts in Cairo, Youness began his career in post-production as a VFX supervisor and illustrator. He then forayed into advertising, working his way up from graphic designer to creative director at some of the top agencies including Leo Burnett Cairo, JWT Cairo and FP7 Dubai. When he’s not directing, he’s a comedian, starring in episodes of his original comedy series Raseeni.

One of the region’s most awarded creatives, his career has spanned the likes of JWT Cairo, FP7 Dubai and DDB Berlin. He switched to directing just over a year ago and has directed spots for Mobinil in Cairo and Saudi Telecom. He recently completed the latest du Tuesday campaign.

Hussein spent 10 years as a creative with Leo Burnett in Cairo before moving into directing. He has several international awards to his name, and left to pursue his career as a film director in 2013. Since then he has quickly built a name for himself directing campaigns for big global brands in Egypt and across the Middle East. He lives and works in Cairo.

Chammas graduated from the Académie Libanaise des beaux-arts in 2005. She worked as a freelance assistant director and a line producer in Dubai before moving back to Beirut, where she joined Independent Productions as a senior producer. She is married to Michel Abou Zeid. They both live in Beirut.

Abou Zeid also graduated
from the Académie Libanaise des beaux-arts in 2005. He started his career as a production manager in Dubai with Independent Productions. Four years later, he was head
of production at the company’s Beirut office. A year after that he was also running their Dubai office. In 2013, he started representing Partizan as
their executive producer for
the region.

Ali Ali is an acclaimed advertising director from Cairo and former executive creative director and founder of Elephant Cairo. He was named by the 2015 Gunn Report as one of the top 10 advertising directors in the world today. He began his career as an art director with D’Arcy Bucharest.