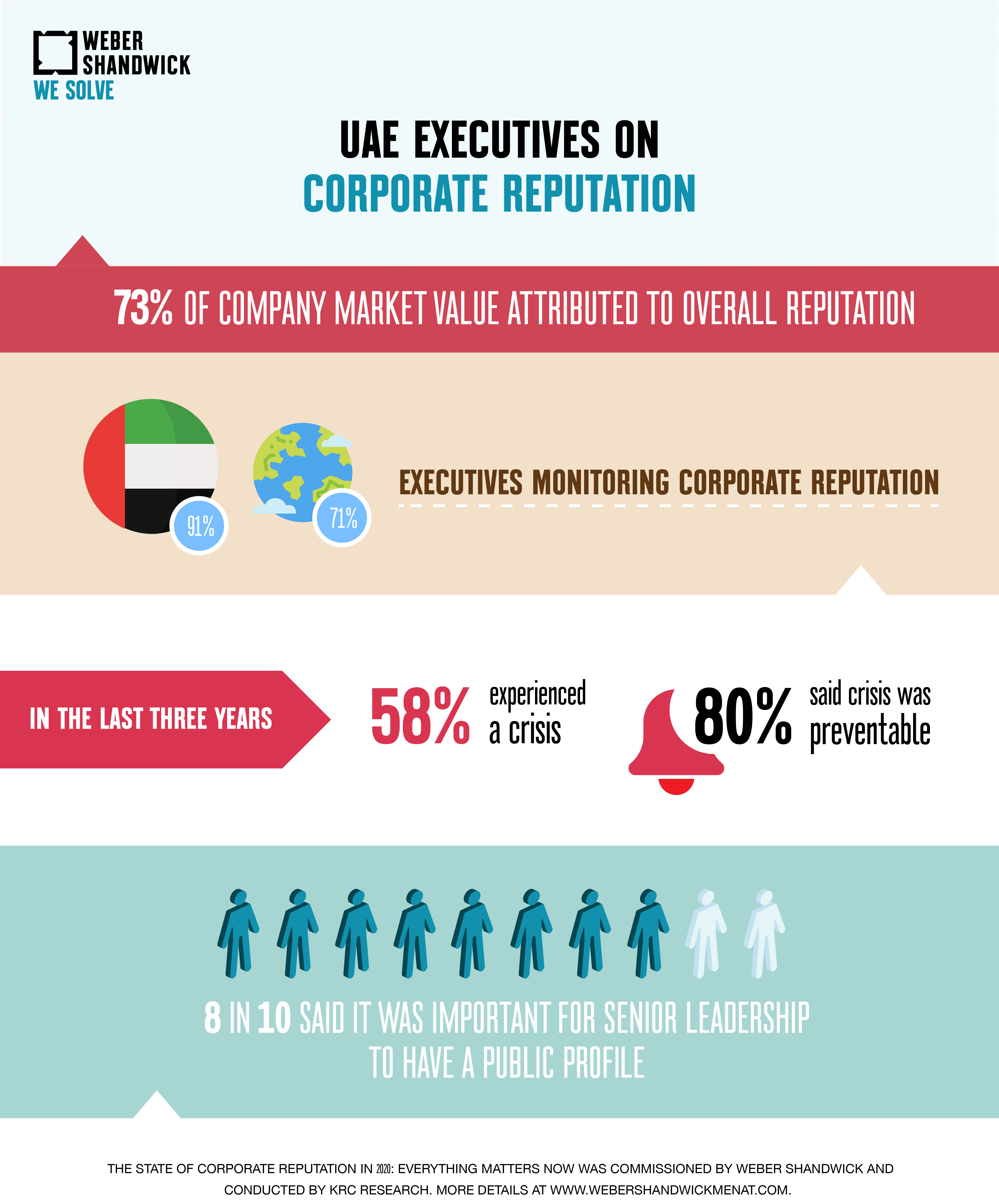 Research released by Weber Shandwick, one of the world’s leading global communications and marketing solutions firms, confirms that corporate reputation is an invaluable asset with appreciable impact on a company’s bottom line. The State of Corporate Reputation in 2020: Everything Matters Now finds that global executives, on average, attribute 63 per cent of their company’s market value to their company’s overall reputation. In the UAE, this global average jumped another ten percentage points to 73 per cent – the highest in the EMEA region.

“It has been widely accepted that reputation makes a meaningful contribution to business success,” said Gail Heimann, president and CEO of Weber Shandwick. “Our study quantifies the remarkably high value assigned to reputation today and shows how it takes a fierce level of attention to an unprecedented suite of reputation drivers – nearly two dozen deemed significant – to remain highly regarded and prevent reputation erosion.”

Other key elements accentuated by executives in the UAE include:

Ziad Hasbani, Regional CEO of Weber Shandwick Middle East, North Africa and Turkey, highlighted another prominent insight from the global study. “From a UAE perspective it is clear that there is a growing understanding among executives to consciously build, evaluate and monitor corporate reputation. The fact that 91 per cent of CEOs and leaders here measure reputation in some way – higher than the global average of 71 per cent – speaks volumes about the importance they assign to it. I think this also reflects a regional trend. On a daily basis, corporate reputation is at the centre of our support to clients, whether through listening to, engaging with, or anticipating responses from their stakeholders.”

The State of Corporate Reputation in 2020: Everything Matters Now, an online survey, was conducted by Weber Shandwick in partnership with KRC Research among 2,227 executives in high revenue companies across 22 markets worldwide, including the United Arab Emirates. In addition to reputation, the survey covers culture, CEO activism, employee activism, crisis and risk. Additional reports will be forthcoming on these topics.

Reputation is similarly influenced by a variety of factors, with no one driver having a greater impact than all of the rest. When asked to rate nearly two dozen different reputation drivers on how much each contributes to their own company’s reputation, global executives assign similar scores to each. All 23 are rated highly by at least half of the global executives in the study. This lack of distinction suggests that companies can no longer solely focus on and prioritise just a few key drivers of reputation, but should instead consider many drivers with all relatively equal importance. From quality of employees and products, to financial performance and corporate culture, everything matters to managing corporate reputation today.

As important as the new insight that reputation is increasingly omnidriven, so is a potential reason for this sea-change shift: most reputational crises are self-inflicted. Among the global executives who report that their firms experienced a crisis in the past two to three years that impacted their reputations, a staggering 76 per cent claim that the crisis was preventable. In an environment where business leaders are being caught off guard by dangers that seemingly lie in plain sight, companies must ensure they are hyper-alert to all factors when working to build and safeguard their reputations.

Reputation is on the board’s agenda

“A company’s reputation matters to more stakeholders than ever before,” said Micho Spring, chair, Global Corporate Practice at Weber Shandwick. “This research demonstrates that executives firmly believe that reputation matters to board members. Board members are clearly perceived as proactive partners in reputation management today. After all, boards of directors have oversight responsibility for mitigating reputation risk and driving business value.”

Reputation is measured and communicated

The majority of global executives (71 per cent) report that their company’s leadership measures or monitors the reputation of their organisation. When asked how reputation gets measured, executives most often report factors such as employee satisfaction or engagement, sales and financial performance, and surveys among various stakeholder groups.

Communication of values is key

Communicating corporate values is critical today. Eight in 10 global executives (79 per cent) say it is important that the CEO communicates the organisation’s values in order to be highly regarded. Additionally, a company’s ability to communicate and deliver upon its mission, vision and value is tied with how a company responds to crisis as the top marketing and communications-specific driver of reputation.

This view is consistent across regions. Eight in 10 executives in Asia Pacific and North America (81 per cent) think it is important for the CEO to communicate the organisation’s values in order to be highly regarded, closely followed by Latin America (79 per cent) and Europe/Middle East/Africa (77 per cent). When it comes to how much a company’s ability to communicate its mission, vision and values contributes to its reputation, executives in LatAm think it contributes to a significantly greater extent than those in APAC, EMEA and North America.

“Despite the challenging landscape of complex reputation drivers, the discipline of corporate reputation is on solid ground as we head into the next decade,” said Leslie Gaines-Ross, chief reputation strategist in-residence at Weber Shandwick. “Our latest research shows why reputation matters and the benefits that come with being well regarded. Reputation is a competitive asset in a world marked by uncertainty, intractable business challenges, lightning-fast digital transformation and brutal talent wars. Strategically cultivating and maintaining a strong reputation, both internally and externally, has to be a top priority for nearly all business leaders today.”

Greg Prager, Chair, EMEA Corporate Practice, Weber Shandwick said: “What we do and make, how we operate and behave, and the impact we have on our employees, customers, partners and communities are all key components of how society perceives the value that companies provide. This complex mix requires companies to take an integrated approach to building and protecting their reputations. By understanding audience expectations, clearly defining purpose and creatively engaging audiences where they are on the topics that are important to them, companies can strengthen their reputation and have a corresponding positive impact on company value.”

The State of Corporate Reputation in 2020: Everything Matters Now provides guidelines for strengthening a corporate reputation to maximise its influence on market value. To do this, we explored a segment of global executives that experiences an exceptionally positive financial result from their strong reputation, reporting that at least 76 per cent of their market value is attributed to their company’s reputation. The “76 Percenters” are companies that are leveraging reputations for maximum financial returns and they differ from the average executive on several key behaviours. The insights below are based on the most substantial differences and form the basis for best practices for turning reputation into market value.