Anil Bhoyrul, the editor in chief of Dubai-based publishing house ITP, has left the company. 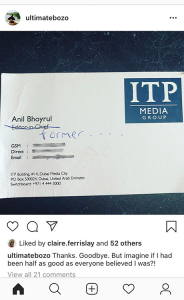 Bhoyrul had been with ITP since the mid-2000s. He was previously with the Daily Mirror in the UK.

He updated his Instagram a day later, on June 15, with a longer statement: “As you may know, after 16 years I have decided to leave Itp media group. Time to be vaguely serious… running a brand like Arabian Business is a huge privilege. The job comes with an enormous amount of power, fun, fame, exhilaration and more. And I have loved every moment of it. But the only thing I will really miss is working with some of the finest people I’ve ever met in media, not just in Arabian Business but across ITP. Thanks to whom I found a career, life, home, wife, 3 kids….and a very large extended family of close friends.”

In past weeks, sources say, it has put a high percentage of its staff on unpaid leave, with those still working asked to take a significant pay cut.