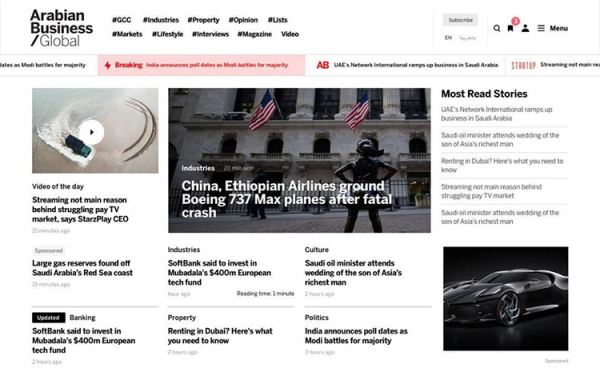 Dubai-based publisher ITP has announced that it will put the website of its flagship Arabian Business title behind a paywall.

It will come into effect from June 26, after which users will be able to read up to five articles a month for free. To read more, they will be asked to pay $5.99 (AED22) a month for access to the site.

Announcing the move, ITP said: “Making quality content available around the clock, to anyone wherever they are in the world, comes with a cost. To ensure Arabian Business can continue to provide the high quality, accurate, insightful, entertaining and useful features and news that you are used to, we are introducing this nominal charge.”

An Arabian Business spokesperson told Campaign: “This is how we see the growth and future of the Arabian Business online brand, alongside the other component parts of the brand’s wide reach. ITP Media Group has evolved rapidly into a digital-first media house – we launched and run the region’s first and largest digital influencer agency – and this is a natural part of that evolution.”

The site currently has about 5 million unique users a month. When asked what percentage of readers they expected will pay for content, the spokesperson said: “Eventually everyone. Our content is expertly written and has a commercial value not simply because advertisers can reach the people who read it, but because of the integral quality of the content itself. Market intelligence has a value that people are prepared to pay for, and we will become transparently accountable to our readership, and judged on the quality of our output.”

The spokesperson added that the move “can only have a positive effect in the long run” on advertising, but for now ITP is treating it as a new revenue stream. They added: “We expect subscription revenue from individuals to overtake advertising revenue in a relatively short space of time and continue to grow steadily.”

They added: “Pivoting from an advertiser- to a reader-driven sustainable revenue model means that more than ever the priority of the site will be quality content that our readers are prepared to pay for. High page impressions and visitor numbers will be testament to our content, rather than what drives it.”

ITP would not confirm if it was planning to introduce paywalls for any of its other titles.