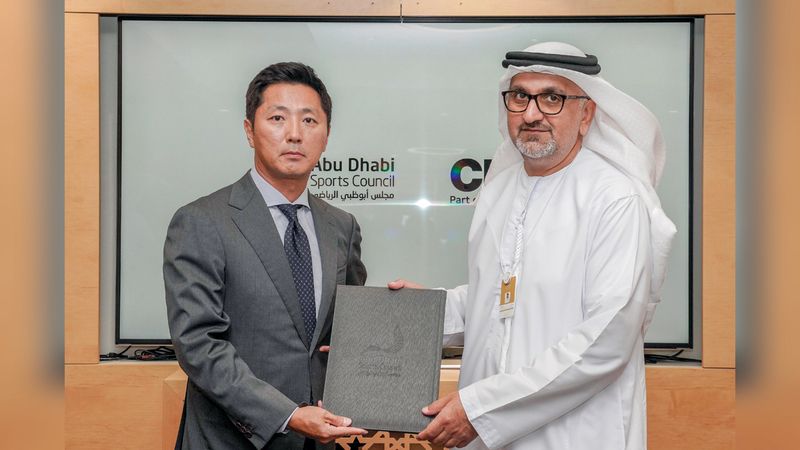 The Abu Dhabi Sports Council (ADSC) has announced the signing of a partnership agreement with Cheil Middle East & Africa, one of Samsung Global Group’s companies, with the main objective of attracting local and global partnerships to sponsor all sports-related activities and events run and organised by ADSC.

This agreement falls under and within Abu Dhabi Sports Council’s ambitious plans and ongoing endeavors to promote important partnerships supporting Abu Dhabi’s sporting successes as the capital of global sports.

Cheil aims to attract local and global partnerships to sponsor all sports activities and occasions organised and managed by ADSC, as well as all International and local events, approved and included in its Annual Agenda, rich with various types of sports, such as the World Sports Leadership Summit “Leaders” – World Basketball Triple Championship – ADNOC Abu Dhabi Marathon – Spartan World Championship – Jiu Jitsu World Championship – Formula 1 Abu Dhabi Race – Mubadala Tennis Championship – UAE Tour – and many other activities in addition to the other local community races organised by ADSC at different locations in Abu Dhabi.

H.E. Aref Hamad Al Awani, general secretary of Abu Dhabi Sports Council, expressed his appreciation and support for this unique partnership agreement with Cheil Middle East & Africa, and its highly positive future impact for attracting local and global partnerships, thanks to the company’s local and international expertise. H.E. Al Awani also confirmed that this is the first major agreement of its kind with a global company providing such services.

In light of this signature event, H.E. Al Awani stated: “We are looking forward to promoting and reinforcing Abu Dhabi’s successes in hosting, organising, and managing global and community sports tournaments and championships throughout the year, and we are hoping that this new partnership with Cheil will promote development, improvement, and growth on Abu Dhabi’s Sports sector and the Athletes.”

For his part, H.E. Lyusok Jung, CEO of Cheil Middle East & Africa, said: “Our partnership and collaboration with ADSC is indeed part of our strategy to expand our business in the UAE, the region, and the world.”

Mr. Maher Azzam, Cheil Middle East & Africa’s head of sponsorship, added that the past had witnessed tremendous growth and development in the quality of activities and events managed and organised by the Abu Dhabi Sports Council, with the aim of enriching the sports’ path in the UAE in general and Abu Dhabi in particular. Mr. Azzam is confident that Cheil will keep pace with this remarkable growth and development and be part of Abu Dhabi’s future successes in the sports industry.