As 2021 draws to a close, Twitter’s end-of-year reflection showcases the unique way the year unfolded across the platform. Through a data pull of Tweets, hashtags and handles, Twitter highlights the stories that led public conversations across the UAE, Saudi Arabia and Egypt. 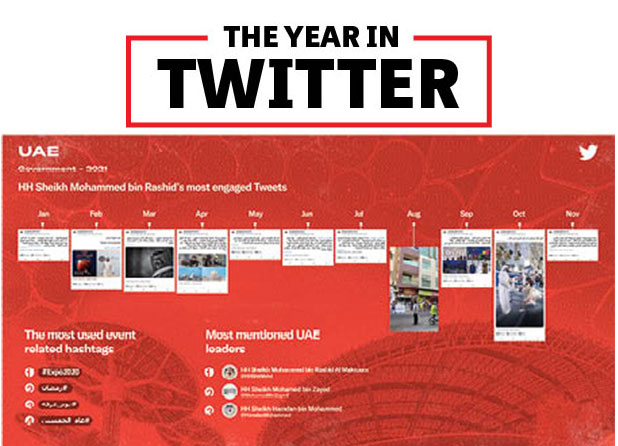 In 2021, following the an analysis of data, Twitter revealed that government-related topics were among the most popular conversations in the UAE. His Highness Sheikh Mohammed bin Rashid Al Maktoum (@HHShkMohd) once again led engaging Tweets; here is a glimpse of His Highness’s most liked Tweets throughout the year:

January: The year kicked off with a celebration of His Highness’s 15th Accession Day as Ruler of Dubai, and his 15th anniversary as Vice-President and Prime Minister of the UAE.

February: February saw the success of the UAE’s first mission to Mars, as the Hope Probe entered orbit on its first attempt. The most liked Tweet in the UAE for 2021, the triumphant mission was also celebrated by NASA’s own Mars Rover, which congratulated the arrival with the words of poet Al Mutanabbi.

March: Following the death of the United Arab Emirates finance minister and deputy ruler of the emirate of Dubai, Sheikh Hamdan bin Rashid al-Maktoum, His Highness shared his condolences as he publicly mourned the loss of his colleague.

April: His Highness shared that the first megawatt from the first Arab nuclear plant has entered the national power grid.

May: His Highness celebrated Eid Al-Fitr with the world, sharing his blessings for the future.

June: HH Sheikh Mohammed continued his #LifeHasTaughtMe series, sharing his knowledge and experiences with the public, and the importance of growing together as a united community.

July: July also saw His Highness impart further insight to his followers, sharing his goals and the challenges faced in building a greater life for
the future.

August: Highlighting the strength, and kindness of the community, His Highness shared a video of a cat rescued from an apartment building, calling for the details of the people involved to thank them.

September: As the UAE celebrated the opening of Expo2020, His Highness shared photos from the opening ceremony, welcoming the world to Dubai and the UAE.

October: With the launch of one of the UAE’s largest events of the year, His Highness shared a behind-the-scenes look into his life, with a photo of his favourite encounter at Expo2020 so far. A young girl had been featured in a video upset at the fact she was unable to meet His Highness. After seeing the video, HH Sheikh Mohammed invited the seven-year-old to Al Wasl Plaza for an impromptu meet and greet, posing for photos with her, and turning her dreams into a reality.

November: His HIghness shared his congratulations with the UAE for the successful bid to become the hosts of one of the world’s most important global climate conferences, COP28, in 2023.

The year also saw continued interest in Tweets from the wider UAE leadership. Here are some of the most liked leadership Tweets of the year:

The most used event-related hashtags

From celebrations of key milestones, through to regional cultural moments, here are the top event hashtags of 2021:

King Salman celebrated Saudi National Day, sharing his thanks for security, stability, prosperity and development being felt across the country.

Marking the start of Ramadan in 2021, His Royal Highness shared his best wishes with the community.

On the occasion of Eid Al-Fitr HRH King Salman celebrated the end of Ramadan, heralding a time of blessings for the country.

HRH King Salman shared his prayers for Eid Al-Adha, celebrating the occasion with the Saudi community.

In the place to connect, when it comes to celebrities, people from across the world can directly reach out to their favourite celebrities on Twitter,  jumping into conversations or sharing their admiration. Here are the most mentioned Saudi singers of the year:

The most used event-related hashtags

As 2021 saw a return to in-person events and celebration, so too did Twitter’s most used hashtags in Saudi Arabia. Here are the top tweeted event hashtags:

As fans continued to take to Twitter to celebrate their love of the game, here are the most retweeted moments from 2021 per month:

May: Al-Hilal celebrated its 17th win of the Prince Mohammad Bin Salman League.

September: Al-Ittihad Club
praised its goalkeeper Marcelo
Grohe, one of the best keepers in
the league.

October: Al Hilal SFC celebrated its win against Al-Nassr FC in the AFC Champions League semi-final, paving the way to the final match of the tournament.

The most used football club hashtags

The most mentioned football players

When it comes to celebrities, people from across the world can directly reach out to their favourite celebrities on Twitter, jumping into conversations or sharing their admiration. Here are the most mentioned Egyptian celebrities of the year:

Most mentioned actors and actresses

Most Liked Tweets by Mo Salah

Egyptian footballer Mohamed Salah once again stole the show on Twitter in 2021. Here are his most liked Tweets, with pictures:

@MoSalah shared an old photo of him visiting Al-Aqsa Mosque.

@MoSalah shared a photo celebrating a moment of joy with his daughter.

@MoSalah showed off his physique with a photo of himself at the gym.

@MoSalah tweeted a photo of himself and football players Hossam Ghaly, Mahmoud Trezeguet and Mohamed Hany.

@MoSalah shared a photo of himself at a stunning beach in Egypt.

@MoSalah tweeted his arrival back in Egypt, with a photo of himself at the airport.

@MoSalah showed team pride, sharing a photo of himself on the field during a game.

@MoSalah tweeted about a match he they lost back in October, with a rallying message reminding fans and followers that the team is going for the title and has what it takes to win.

@MoSalah tweeted a photo of himself enjoying his time in a pool.