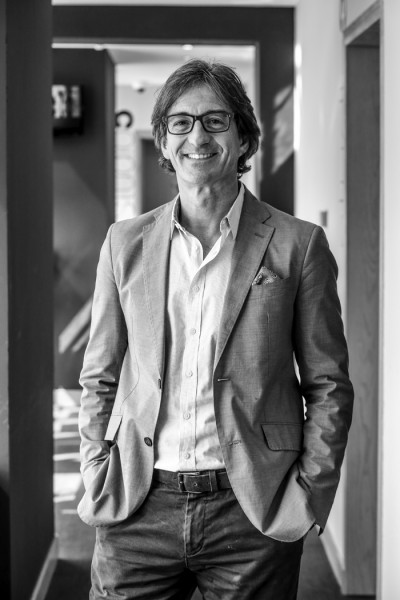 Douglas Palau has joined BKP Media Group with ambitious plans for growth. Iain Akerman caught up with him to find out more

If there’s one thing you can rely on, it’s Douglas Palau’s sense of occasion.

Word of his impending departure from Impact BBDO had begun to emerge in February, but it wasn’t until May that the announcement was officially made and Palau’s switch from global advertising network to independent media entity was confirmed. Throughout it all he retained a sense of dramatic anticipation.

Formerly vice president of Impact BBDO, he left the network to become a partner in Dubai-based BKP Media Group, taking on the role of chief executive at the sound and video production group after years of operating in the corridors of multinational agencies. Founder Barry Kirsch moved to the position of chairman upon his arrival, with Palau also becoming a partner in the Dubai-based business.

Responsible for group growth, with a key focus on the expansion and development of BKP’s film and video content production division CollectiveBKP, Palau has is eyes set on a new style of content, believing there are synergies to be exploited with the group’s talent base and music culture.

“Content development is where all the marcom action is these days so the opportunity to drive a group which has a unique combination of talent and is ambitious to grow fast in that new arena is enticing,” says Palau. “Anyone who knows me appreciates my passion for audio visual storytelling. They know my ambition has always been to develop pure-form entertainment so this move was a natural evolution to where I always saw my career going.

“The BKP partners know the value I add with respect to media and brand understanding and they have empowered me to drive growth and take the company services forward.”

To achieve that goal the group will be focusing on three main areas: strengthening BKP’s leadership position within music composition, radio production and sound design under the leadership of managing partners Polly Gotseva and Matt Faddy; expanding the group’s video and content production business; and identifying, collaborating with, managing and nurturing the best artists, influencers and content creators in the Arab world.

“It is,” says Palau. “There is amazing growth of talented performers, influencers and content creators in the Arab region and BKP is making it its business to identify, collaborate, manage and nurture the best there is. BKP’s Vox Arabia already represents many of the best Arabic voice talents and is now expanding to incorporate visual performers and influencers.”

“The core story has to be great otherwise it is just going to get lost in the media sphere,” asserts Palau. “The more relevant and creative it is, the more it will be enjoyed, consumed and shared and that makes it effective. By employing talented millennials who live and dream its social media lifestyle our work fully reflects the millennial mind-set. So the content we produce is better tuned to inform and entertain.

“This doesn’t mean BKP’s video ambitions are confined to branded content. Having such a mixed palate of storytellers pushes us to invest in and develop our own proprietary programs. We have our own web,TV and film projects in development and we will look forward to breaking news on that in 2017.”

Amidst all this, Kirsch, who last year launched BKP Radiophoria to celebrate radio advertising in the region, will focus more of his time on developing the group’s own properties. He is currently composing and writing a new Arabic-themed musical show.

As part of its expansion plans the group has opened BKP & Co Bulgaria, a specialised video content and TV production service that offers studios, locations and technical expertise at “extremely competitive rates”. There are other targets, such as widening industry appreciation of the role of sound directors, but the company’s expansion model includes growth through partnerships and collaboration.

“Geographically we are expanding video and film via BKP & Co Bulgaria, which will focus on supporting productions from the Middle East and Europe initially. Sound and music wise we will extend our service to wider markets but we have no specific plans to add more BKP offices right now but that door is always open.

“As our growth vision is realised over the next 18 to 24 months we will add talent as and when the business requires. A key element of our model is to grow through partnerships and collaborate on a project basis with content specialists and influencers.”

In Dubai, Reem Hameed and director Omar Abbas will continue to head up CollectiveBKP, which was launched two years ago and is increasingly focussed on specialised immersive content, including 360-degree video and augmented reality. Palau describes CollectiveBKP’s role as “making stuff for millennials”, which to many may sound like a narrow field of vision. Nevertheless, it is a segment they are targeting specifically.

“‘Making stuff for millennials’ means our expertise has a clarity of purpose and hence we focus our talent, insights and content creation around a significant Arab consumer demographic (definitions vary but millennials essentially span 18 to 36-year olds),” says Palau. “A large group who are social media natives and who expect and seek relevant, informative, immersive and entertaining content that reflects their own taste.

“That doesn’t mean we won’t produce for younger or older groups, but millennials will be our expertise sweet spot.”

Video content is a challenging and competitive market, but Palau appears confident that BKP’s growth plans can be realised within the time frame that he has set.

“Ultimately, I see our blend of specialised talent, marketing experience and technical facilities bridging the strategic content needs of brands, agencies and media companies and producing the cool, relevant and entertaining stuff that we all now call content,” says Palau. “It’s a great time for our business and we are having a great time creating the right stuff at BKP.”

“I had an amazing career at BBDO, one of most respected and awarded advertising agencies in the region and globally.

“I am proud of everything we built together over many years and of course in my last year Impact BBDO was named Campaign’s Agency of the Year as well as Dubai Lynx Network of the Year, which was great for everyone. I was working with so many great people and clients who I respect and admire and we will stay friends for sure.

“BKP is a different style of company and I am loving the diversity of talent and the fun creative vibe at BKP already. The change has definitely given me new perspective and energy.”