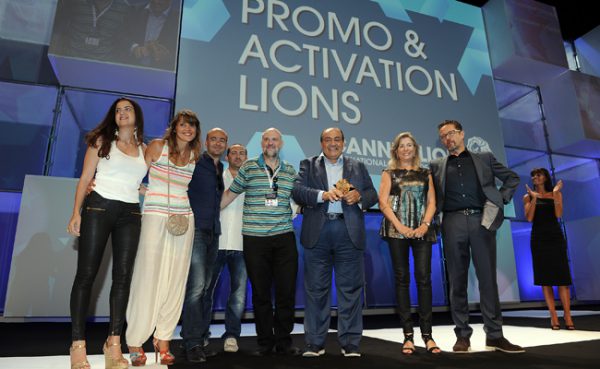 Tunisia’s Memac Ogilvy Label (pictured) won two promo & activation golds for its ‘The Return of Ben Ali’, while Leo Burnett Beirut landed gold in PR with ‘No Rights, No Women’. The same campaign also won two PR silvers, while the Beirut agency’s ‘Break the silence’ for Himaya picked up bronze.

In total, the region walked away with eight awards during the opening awards ceremony, with TBWA\Raad winning bronze in promo & activation for its fridge magnet for Red Tomato Pizza and Y&R Dubai bagging a direct bronze with its ‘Edible desert survival guide’ for Land Rover.

With two Cannes Lions golds so far to its name ‘The Return of Ben Ali’ has become the region’s most highly decorated campaign, having already picked up a clutch of golds at the Dubai Lynx in March and a grand prix at the Clio Awards in New York. The agency’s creative team is led by Nicolas Courant, who yo-yoed back and forth to the stage all night during the Lynx and may have to do the same at Cannes.

Speaking of the double gold, Edmond Moutran, chairman and CEO of Memac Ogilvy Middle East and North Africa, said: “There is no bigger entry to the Cannes scene than walking on stage and picking up two golds before you even attend a lecture. I arrived in Cannes at 5:30pm only to be told that at 7:30pm we can pick up two golds. This is the crowning of a long career and a huge effort seeking to upgrade the standard of our creativity at Memac Ogilvy and in the MENA region. This is the happiest moment in my career and I am so grateful to all the creative of Memac Ogilvy, especially the Tunisian team who won these awards.”

Half of the eight awards won last night went to Leo Burnett Beirut, with three going to ‘No Rights, No Women’. Kamil Kuran, regional managing director, Levant, at Leo Burnett MENA, said: “The Lions won by Leo Burnett Beirut serve to further cement the agency’s creative leadership position and rank among the top global creative agencies (for reference, Leo Burnett Beirut was ranked 26th globally in the Big Won Report for 2011) and to prove that Lebanon is a centre for creative excellence, driven by local Lebanese creative talents. Further, the wins in PR strengthen the validity of Leo Burnett’s Humankind approach to brand building by creating campaigns that generate buzz, conversation and word-of-mouth online and offline.”

The opening gold tally of three matches the total gold haul at last year’s festival. In total, 10 Lions were won by the Middle East and North Africa last year.

Winners in the outdoor, mobile, creative effectiveness and media categories will be announced this evening.