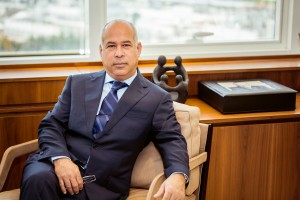 The 2017 Dubai Lynx Advertising Person of the Year says his accolade reflects a partnership. “I’m really proud to say that although I received the Advertising Man of the Year myself, this award is for my media partners,” Pierre Choueiri tells Campaign. “This is a recognition of their success, and definitely for my team, because I have a dream team.”

The chairman and CEO of the Choueiri Group says that when he speaks of his media partners, he is not just talking contracts: “They are partners in the full meaning of partnership with the media owners.”

These owners include MBC, the region’s largest television network. The Choueiri Group represents MBC and many other media owners, selling their advertising space to clients through media agencies. MBC is not the only big player to be represented by the Group. The company also represents Al Bayan and Emarat Al Youm newspapers and Al Arabiya news channel, among many other big names across a range of media.

Choueiri says he works with the best. “The only media that we represent are either Number One or have the potential to become Number One in their field,” he says. “If you represent the best media, if you give them peace of mind that their campaign will succeed as per their requirements, why would they go elsewhere? No important media is still outside the Group.”

If any new media owners enter the market, he says, there are bound to be conversations within six months about representation with Choueiri Group.

Being at the top of the pile doesn’t mean either the company or its leader can be complacent, though. “There is one recipe,” says Choueiri. “The one who is on top of the pyramid – which is me – should go back to school and say ‘I want to learn’. When you start with yourself, then everything else becomes easy.”

The media industry is experiencing “tricky” years, he says. 2016 saw a 15 per cent drop in advertising spend from 2015, and Choueiri expects 2017 to drop by about the same amount. The decline will continue until the second half of 2018, when economic moves taken by Saudi Arabia and other GCC countries – such as cutting subsidies, streamlining government and reducing reliance on oil revenues – will begin to kick in.

The current decline is not universal across all media. “TV is slightly dropping,” says Choueiri. “Print is the biggest loser; it is in freefall. Outdoor and radio – give and take – are maintaining their spend. And then digital space is the only media that is increasing.”

It was in anticipation of a growth in digital that Choueiri Group launched Digital Media Services (DMS), its digital representation arm.

“I can proudly say that five years after we put the plan in place in 2011, DMS is up to target,” says Choueiri. “It is the third player in the MENA region, after Google and Facebook, and the difference between DMS’s portfolio and Facebook is really minimal.” DMS has also become the first digital network in the region (including Google and Facebook) to be audited by MOAT. The US-based analytics company is accredited by the Media Ratings Council. Last month it signed a partnership in the region aimed at offering more transparency to Choueiri Group’s advertisers.

This is necessary in a maturing digital market. “Now the market, I would say, has started to regulate itself and put down some guidelines for the digital world in order to frame the business,” says Choueiri. “You cannot keep a new offering in a market as a loose canon; no one will accept it.” The pace of digital development is now slowing as regulation comes in and clients demand more transparency.

DMS was launched in anticipation of changes in the industry. “We anticipated that digital will take part of the TV business,” says Choueiri. “It should. It’s normal. And it’s video. When digital started it used to be about banners, but we anticipated that video is king, that content is king and this is what will prevail. We were right in our thinking, and a lot of the changes we anticipated were implemented by the media owners.” For example, MBC launched Shahid, a video-on-demand platform, in August 2011.

“We anticipated, along with [the media owners], that the market will change,” he says. “Instead of staying closed up in our castle, not thinking or looking outside, we saw what was happening, we started implementation and now I’m proud to say that yes, we might be losing from one side, but we are gaining back from the other side.”

Choueiri Group’s focus is on video, says the chairman: “We believe that people will always consume content or video, be it through digital means or a satellite feed or cable or whatever means.”

He repeats the mantra that content is king. “We believe that people will always consume content, be it short-form, long-form, or whatever the form of that content is. That is the focus of the group.”

Digital alone is not enough, he maintains. Nor is traditional, non-digital media alone.

“What is important about DMS is the area of offering that we have managed to establish,” he says. “Any product that a client would like to have in order for his campaign to succeed is available, along with traditional media.”

The media market is facing a “new reality,” though, and it has been changing for the past five years or so, driven by technology. “Our industry is mutating, it is changing. The base is still the same, but you have to cope with new technologies.”

That base is that clients are still looking for the same returns on investment and the same deliverables, but now they have more options. This means that clients can better target their advertising and will tolerate less wastage.

“The change that we are noticing from the client side is that they used to advertise in a certain manner, but now they have more offerings available so they want to use everything to maximise their deliveries on the same dollar that they are investing.”

It is fair that they should become more demanding, he says. “It is their right, so in order to stay on top of your game you should be offering them whatever they need. Simple.”

And the Middle East media market in general has been becoming more mature since advertisers began changing their business models in 2014-15. “Clients, be they multinational or regional, are redefining themselves in the region,” he says. “It used to be a high-growth region, and nowadays it’s becoming a mature region.”

The mutation of the market will continue for at least five years, driven by technology. Choueiri says he can’t predict what the next advance will be. “I wish I knew,” he says. “But when it comes I will make sure we will be on top of it.”