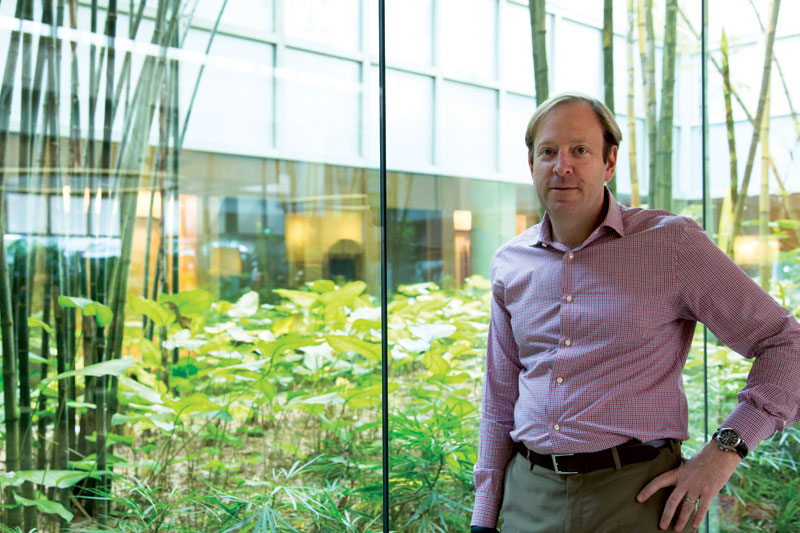 He is sitting in a conference room beside the main reception at the firm’s regional headquarters in Knowledge Village, Dubai. Outside, a huge ‘welcome’ sign alludes to his presence, while scattered here and there are screens with Benett’s name and pho- tograph on and the #askmewhy. We are discussing the performance of Havas Worldwide Middle East and it appears that being neither here nor there is not an issue restricted only to the region.

“When I describe both publicly and privately where I think we are at – and this is speaking more specifically at a creative group level – the last two years we have seen a financial and an operational turnaround ahead of a cultural and creative turnaround,” says Benett, who is also chief executive officer of Havas Creative Group. “The culture is get- ting far stronger and far better, and the creative is get- ting stronger – although not as strong as I would like – and we’re making many changes all around the world.

“We’ve said ‘ok, well, we are in a creative industry, we do have great creative people, but people haven’t been held accountable for creativity in the company. So we’ve put it front and centre of the agenda and have now made creativity a fairly significant component in the bonus scheme of all of our CEOs around the world. What we’re trying to do is drive – not just a culture of creativity and have everyone understand that it’s everyone’s job to be creative – but we’re also trying to hold a much higher flame on accountability.

“We’ve made mistakes but there is a definite commitment by the company to invest in creativity. We’ve looked at what’s happening in our best agencies – what is it about the culture, how do we learn from that, how do we scale it and we are using that to help us build a creative culture across the entire company.”

On the ground this has led to the creation of Havas Villages in various countries and cities around the world, with Havas housing all of its agencies in a particular area under one roof. The Dubai Village was officially launched in September, meaning ad agency Havas Worldwide, media agency Havas Media, Havas PR, Havas People and Havas Health now all live together. Around 18,000 people work for the company globally, around a third of which are in villages. It is all part of the ‘Together’ strat- egy, designed to enhance collaboration and integration across the group.

“The main thrust of it is to have radical collaboration as the operating system of the company,” says Benett. “So literally to do everything humanly possible to make collaboration – peer-to-peer, person-to-person, discipline- to-discipline and even, dare we say, jumping the wall between creative and media – work and remove every barrier in place – penile barriers, silo barriers etc. The manifestation of that is Havas Villages, where we put creative and media back together.”

Interestingly, in the Dubai Village both Havas World- wide and Havas Media are overseen by the same man – Pierre Soued. “This is actually quite rare,” admits Benett. “But it’s a a big change, because he’s able to make decisions on not just what’s best for a shared client but what’s best for a client who we don’t do the creative for or we don’t do the media for. But they could use thinking of one or the other to help make our work better. He’s able to do that.”

The group’s regional operations are a 50/50 joint venture between Havas and the Chalhoub Group and Benett says the dynamics of that relationship are not set to change. Plans to expand into “some of the bigger geographies that we’re not present in” will reach fruition next year, while further disciplines will be launched and acquisitions made.

“I would like to see us – in villages and beyond – putting significant disciplines more tightly together: having integrated strategy practice; having social media and mobile that is completely integrated between creative and media.

“We’re 20 months in development right now but in those 20 months we’ve launched 35 villages, we’ve put companies together, we’ve done all of the initial work with Vivendi [a French mass media company], we’ve been enhancing the management team, we’ve been changing configurations of geography. So a lot’s been going on. There’s still a tre- mendous amount to do but there’s been tonnes of progress. But if we’re in a 26-mile marathon, we’re on mile six or seven. It’s a journey, for sure, and my guess would be that we’ll start to see the benefits in at least another year.”