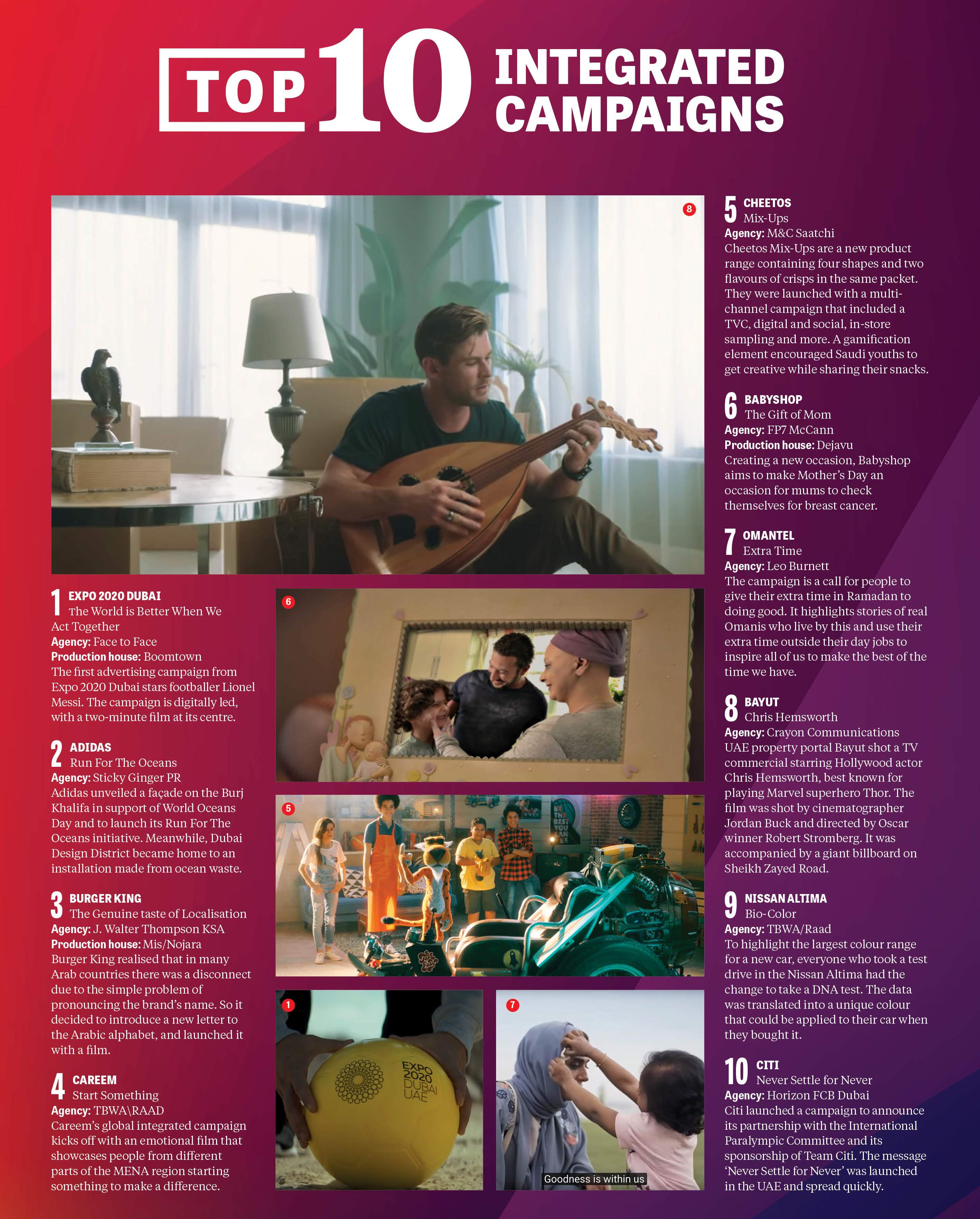 1. EXPO 2020 DUBAI
The World is Better When We Act Together
Agency: Face to Face
Production house: Boomtown
The ﬁrst advertising campaign from Expo 2020 Dubai stars footballer Lionel Messi. The campaign is digitally led, with a two-minute ﬁ lm at its centre.

2. ADIDAS
Run For The Oceans
Agency: Sticky Ginger PR
Adidas unveiled a façade on the Burj Khalifa in support of World Oceans Day and to launch its Run For The Oceans initiative. Meanwhile, Dubai Design District became home to an installation made from ocean waste.

3. BURGER KING
The Genuine taste of Localisation
Agency: J. Walter Thompson KSA
Production house: Mis/Nojara
Burger King realised that in many Arab countries there was a disconnect due to the simple problem of pronouncing the brand’s name. So it decided to introduce a new letter to the Arabic alphabet, and launched it with a ﬁlm.

4. CAREEM
Start Something
Agency: TBWA\RAAD
Careem’s global integrated campaign kicks oﬀ with an emotional ﬁlm that showcases people from diﬀerent parts of the MENA region starting something to make a diﬀerence.

5. CHEETOS Mix-Ups
Agency: M&C Saatchi
Cheetos Mix-Ups are a new product range containing four shapes and two ﬂavours of crisps in the same packet. They were launched with a multichannel campaign that included a TVC, digital and social, in-store sampling and more. A gamiﬁcation element encouraged Saudi youths to get creative while sharing their snacks.

7. OMANTEL
Extra Time
Agency: Leo Burnett
The campaign is a call for people to give their extra time in Ramadan to doing good. It highlights stories of real Omanis who live by this and use their extra time outside their day jobs to inspire all of us to make the best of the time we have.

9. NISSAN ALTIMA
Bio-Color
Agency: TBWA\Raad
To highlight the largest colour range for a new car, everyone who took a test drive in the Nissan Altima had the change to take a DNA test. The data was translated into a unique colour that could be applied to their car when they bought it.