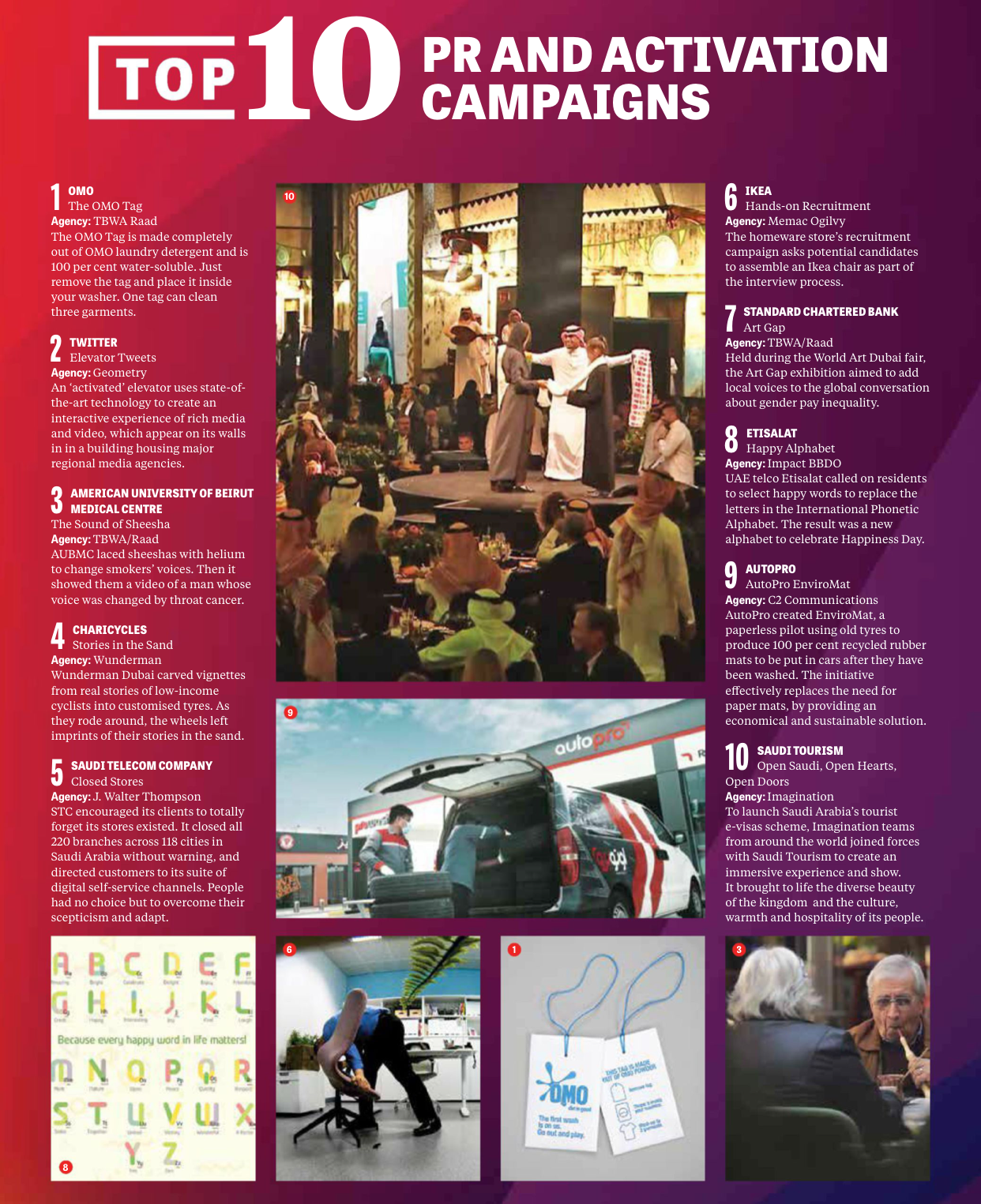 1. OMO
The OMO Tag
Agency: TBWA Raad
The OMO Tag is made completely out of OMO laundry detergent and is 100 per cent water-soluble. Just remove the tag and place it inside your washer. One tag can clean three garments.

2. TWITTER
Elevator Tweets
Agency: Geometry
An ‘activated’ elevator uses state-ofthe-art technology to create an interactive experience of rich media and video, which appear on its walls in in a building housing major regional media agencies.

3. AMERICAN UNIVERSITY OF BEIRUT MEDICAL CENTRE
The Sound of Sheesha
Agency: TBWA/Raad
AUBMC laced sheeshas with helium to change smokers’ voices. Then it showed them a video of a man whose voice was changed by throat cancer.

4. CHARICYCLES
Stories in the Sand
Agency: Wunderman
Wunderman Dubai carved vignettes from real stories of low-income cyclists into customised tyres. As they rode around, the wheels left imprints of their stories in the sand.

5. SAUDI TELECOM COMPANY
Closed Stores
Agency: J. Walter Thompson
STC encouraged its clients to totally forget its stores existed. It closed all 220 branches across 118 cities in Saudi Arabia without warning, and directed customers to its suite of digital self-service channels. People had no choice but to overcome their scepticism and adapt.

9. AUTOPRO
AutoPro EnviroMat
Agency: C2 Communications
AutoPro created EnviroMat, a paperless pilot using old tyres to produce 100 per cent recycled rubbermats to be put in cars after they have been washed. The initiative eﬀectively replaces the need for paper mats, by providing an economical and sustainable solution.

10. SAUDI TOURISM
Open Saudi, Open Hearts, Open Doors
Agency: Imagination
To launch Saudi Arabia’s tourist e-visas scheme, Imagination teams from around the world joined forces with Saudi Tourism to create an immersive experience and show. It brought to life the diverse beauty of the kingdom and the culture, warmth and hospitality of its people.