Publicis Media chairman Alex Saber: ‘We have to transform’ 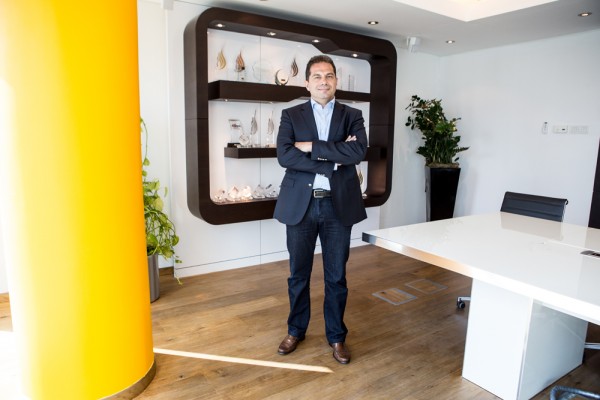 “Things can only get better,” smiles Alex Saber, evoking – probably unintentionally – one of my favourite dance anthems of the 1990s. “There will be no fundamental changes in the Middle East and North Africa. The culture will aspire to improve, but there will not be any big changes. I’m not worried,” adds, somewhat optimistically, the new chairman of Publicis Media MENA as the global giant undergoes one of the biggest shake-ups in recent adland history.

On the global level though things couldn’t really be much worse; in the last 12 months, lead agency Starcom Mediavest Group (SMG) has faced disappointment after disappointment with the losses of Procter & Gamble, Coca-Cola and most recently Wal-Mart. Now as the entire group undergoes an enormous restructure to re-invigorate the business – and some client confidence – the company has since announced plans to disintegrate SMG and fellow – some say rival – lead agency Zenith Optimedia and reorganise them into four separate ‘hubs’: Starcom, Zenith, Mediavest Spark and Optimedia Blue 449. Holding group VivaKi, of which Saber was MENA chairman, will be disbanded and the specialist agencies of Performics, Ninah, LiquidThread and MRY all face an uncertain future.

Though Saber stresses the four brands will remain independent, they will be subject to a raft of streamlining and ‘harmonisation’ efforts, with the P&L merged into one and rooted back to Publicis Media as buying power is also consolidated into one single pool. But given that buying in the MENA region was already “100 per cent” streamlined, the changes should have minimal impact on the region and will simply make it consistent with the rest of the world, says Saber.

“There will be some change, but in my role there will be lots of similarities between what I currently do and Publicis Media. Before there used to be much more separate P&Ls, but now it will be much simpler and a bit more interesting to have just one. It will be simpler, but at the same time much more challenging. All brands are at parity, but we need to develop each brand with equal efforts, and at the end of the day it’s a challenge. Our goal is to grow the entire portfolio of Publicis Media regardless of brand because it is one P&L.”

At the forefront of the group’s strategy will be seven global pillars: data, technology and innovation, content, trading and buying, performance, business development, business transformation and finally analytics and insights. All these areas will be overseen individually by a newly-appointed head, of whom some have been sourced from the soon-to-be-defunct brands of SMG and VivaKi, alongside, tellingly perhaps, Performics. On top of all this will be three main objectives aimed at putting clients’ needs first: trust, talent and transformation.

“Trust is a key area as without our clients we don’t exist and we need to continue building our client base and delivering their needs,” explains Saber. “The talent is the backbone of the company and this is where it is key to attract and retain clients. The transformation is where it comes to the new world; we have to transform more on the digital front and keep adapting to new ways and new technology and so on.

“These are the three key areas that everyone has to maximise. When it comes to specific areas, of course we need to grow all the four brands; there are some which are strong in specific markets and some which are less strong in other markets and we need to develop these brands, develop the capabilities of our group and other basic stuff. New clients, growth, so forth.”

Nevertheless, chief executive Maurice Lévy’s major overhaul of his business has provoked some incredulity and the odd raised eyebrow from some of Publicis’ rivals. Dentsu Aegis’ CEO for the Americas and EMEA Nigel Morris recently expressed his disbelief to Campaign about the proposed separation of Publicis’ media, creative and digital capabilities. And Levy’s arch-rival Sir Martin Sorrell – with whom he is currently embroiled in a public spat over the J. Walter Thompson sexism scandal – mused that the new structure could create conflict by “bringing things too close together”. Unsurprisingly, Saber disagrees.

“Will it create conflict? I cannot see this happening,” he says “Today you can create conflict and you can sort conflict, and you control your destiny. I don’t agree with [Sorrell] at all. We will have four separate brands with four separate leaderships, but what we will be doing is consolidating some of the support practices and some of the P&Ls. When it comes to conflict, absolutely not. The client will be at the forefront. There will separate client contacts, operations in terms of day-to-day, so I definitely disagree. Again Martin Sorrell… he always wants to pick on things.”

He continues: “The brands will still operate independently and have their own objectives and leadership. And this is where the brands will sit. All we are doing is establishing efficiencies and today everyone is seeking to get more efficiencies. So this is where we are harmonising the practises to make them more efficient and more productive. The brand leadership and brands themselves will remain separate and will operate separately somehow and there will not be any conflict.

“We will never jeopardise our clients’ interest or their confidentiality – they are our bread and butter and this is the obvious. We are trying to make things simpler and I think clients want a simpler approach – they don’t want complexities, they want less silos and they want efficiencies and for us to deliver value and trust to them.”

Speaking of leadership, of course with any major restructure usually comes an influx of new faces and this one will be no different. One major mover is SMG London’s co-CEO and adland ‘veteran’ Steve Parker, who will serve as CEO for Publicis Media MENA under Saber’s overall leadership. SMG’s current regional CEO, John Antoniades, has already boarded a flight back to London, while the future for Zenith Optimedia’s CEO Firas el Zein and CV Suvi, the recently appointed managing director of Blue 449, is unknown. However, despite the turbulent climate, Saber assures me the re-structure will bring “no job losses whatsoever” on a ground level. In fact, there are plans to expand the current headcount by around 60 new people across the group’s six offices in Dubai. Across the entire MENA region, the total headcount it expected to reach nearly 600 by the beginning of July.

But, as Saber admits, such a spread of bases has left the workforce becoming somewhat “fragmented”. As a result, the group plans to open a central Publicis Media office in Dubai Media City, under which all the agencies will be housed. Though the contract has been signed, the move is not expected to take place for another two years.

Nevertheless, Saber expects to see a lot of excitement among his teams when the move is formally announced to them in the coming days. Is that because there is an atmosphere of disquiet among the teams amid such changes? And has the re-structuring signalled something of an exodus? On the contrary, says Saber, the changes have met a largely upbeat reception. “I have seen a lot of positive anxiety and a positive momentum because we have been doing this and consolidating lots of the Publicis Media brands recently. Today the new world is more consolidated under the Publicis Media level and I think with all the interactions I’ve done with the staff, everyone is very upbeat. Everyone is excited. It gets the benefits for our clients, which are the benefits for everything we do. These will be instrumental and will have significant benefits for our wellbeing, so on the contrary I think everyone will be excited and upbeat. We are on an aggressive recruitment drive. There’s no uncertainty in the Middle East.”

He adds: “We are blessed in the Middle East to have one of the lowest turnover rates in the market and versus our other offices outside MENA, so I think people are committed in general to the group. Our turnover rate is minimal and things can only get better. Our turnover rate is in the five to six per cent, which is quite positive given that this is very much an expat labour force and people come and go. I think it is a very competitive, positive figure compared to other companies in the Middle East and versus our group outside the MENA.”

Publicis’ global changes couldn’t have come at a more difficult time for the Middle East’s advertising industry. Figures compiled by its own Zenith Optimedia forecasted that the region’s adspend would sink by 6.8 per cent between 2015 and 2016, making it the only world market to suffer a decline. Will the proposed changes aggravate what is already a fraught time for advertisers and media agencies in the Middle East?

“When it’s tough, this is where companies and successful companies shine. It’s definitely tough times for our clients, the region, but this is where we have a solid growth plan in 2016 in spite of all the uncertainty in the market. Last year was a phenomenal year for our group in terms of growth, so this year, despite all the tough times, we’re quite optimistic to meet all our commitments and growth patterns. This is where strong agencies and companies will shine