While residents of both countries display similar levels of trust in review sites, the UAE public is more likely to find them useful.

As the world becomes more digitalised, online reputation can be the strongest asset and at the same time the biggest liability. Online reviews matter and are often used by consumers as their sidekick before making important decisions. YouGov’s latest study reveals the power of review and rating sites (like Google Reviews, Glassdoor, etc.) and the trust that people have in them.

In UAE, more than two-third (67 per cent) of residents trust review and rating sites, while only 5 per cent indicated a distrust. Similar attitudes are held by the KSA public, where 62 per cent showed confidence in these sites, and a very small number said they do not trust them (3 per cent). 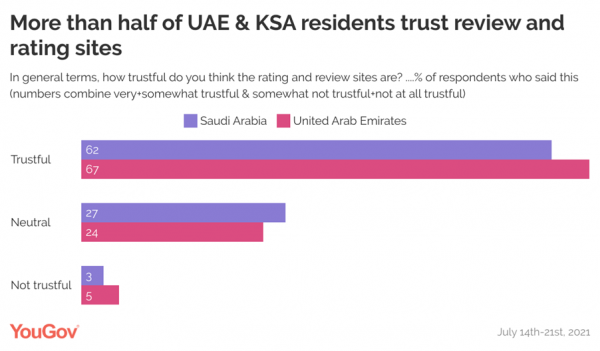 Interestingly, men compared to females are more likely to trust these sites in both UAE (70 per cent men vs 63 per cent women) and KSA (63 per cent vs 59 per cent).

Notably, a sizable proportion of consumers in both countries haven’t made up their mind about these sites and remain undecided about their reliability (27 per cent in KSA & 24 per cent in UAE).

When it comes to checking the reviews or ratings of different products and services, KSA residents (48 per cent) were more likely than people in UAE (44 per cent) to turn to online critiques in the past 12 months while deciding for a place to eat (restaurants, cafes). Even for products like household appliances (37 per cent in KSA & 27 per cent in UAE) and makeup & personal care (29 per cent vs 18 per cent), consumers in KSA seem to be more reliant on websites for reviews and ratings than those in UAE. 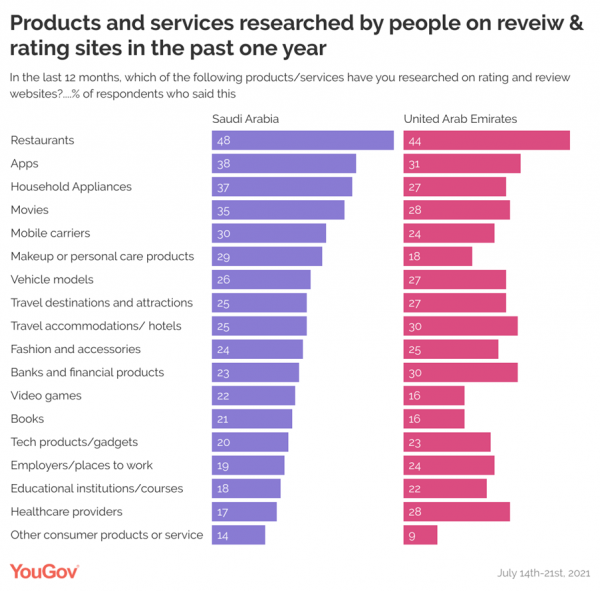 Today, finding a worthwhile movie to watch has become easier than ever with the help of movie review sites like IMDB, Rotten Tomatoes, etc. More than a third in KSA (35 per cent) and a slightly lesser proportion in UAE (28 per cent) claim to have checked audience reviews of movies before deciding to watch them.

Like movies, app ratings and reviews also have a significant impact on a consumer’s decision to download an app. Compared to people in the UAE, residents in KSA are more likely to check app reviews (38 per cent vs 31 per cent). However, when it comes to healthcare providers, UAE residents claim to be dependent on the public’s opinion on review sites than their Saudi counterparts (28 per cent in UAE vs 17 per cent in KSA).

Furthermore, in the past 12 months, almost a fourth (24 per cent) in UAE- and one in five (19 per cent) in KSA have headed to sites like Glassdoor to find reviews and ratings of their potential employers.

Data also shows that an overwhelming majority of respondents in both UAE and KSA find these sites to be useful. The numbers are more pronounced in the UAE as compared to KSA (83 per cent vs 79 per cent). 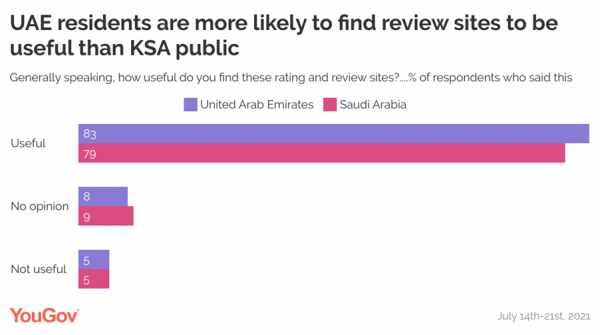