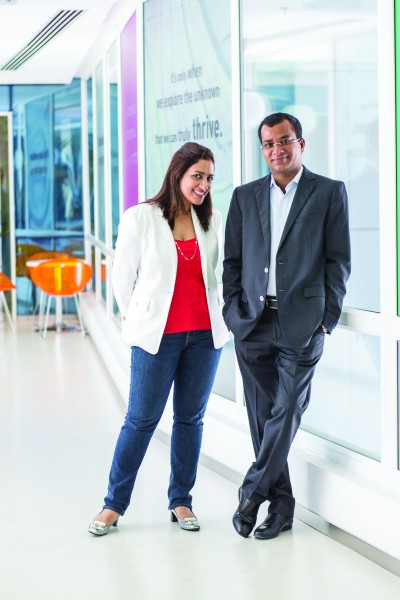 Mohan Nambiar is talking journeys – those that inspire, that have no final destination and that ultimately never end. And no, MEC MENA’s chief executive is not discussing his plans for a mid-life gap year. Instead, the rather grandiose metaphor is what will underpin the media agency’s new content division Wavemaker, which launched in the Middle East last month.

While most would take the first option, Nambiar and newly-promoted regional head Fatima Shaikh appear relatively excited by the road ahead for MEC. As one of 10 regional markets chosen for the global launch, the new Middle East hub will utilise data from MEC Momentum to create a brand’s “purchase journey” and will then create content based on these insights. However, like seemingly everyone else in the industry, both Nambiar and Shaikh cannot help but grimace when asked to define what exactly is content? “It’s another media; another media type. It’s everywhere right?” suggests Nambiar. “It’s basically storytelling with the right connections because your consumer is not looking for content,” Shaikh elaborates. “When they go on social platforms, they’re not seeking content, so it’s how you are connecting and engaging with them. And it’s been around forever – we have been doing it for 10 years now, but I think now the industry is waking up to it as a buzzword.”

Though seemingly nothing new for MEC, the formation of Wavemaker will bring with it a lot of changes, primarily the consolidation five disciplines within the WPP media network: content strategy, social, partnerships and experiences, SEO and creative services. The latter will arguably play the biggest role when it comes to making Wavemaker stand out from its competitors, which are no longer limited to just other agencies. Everyone from JW Marriott hotels to, more recently, Bloomberg, is opening their own in-house content studios. And as Shaikh admits, MEC’s legacy lies with media and, more recently, research. So, to quote Shaikh, how will the agency “humanise” these data-driven insights into something that really moves people? The right talent, naturally, will play a role in this. “It’s about listening and we do a lot of listening,” says Shaikh. “And through the community management we are driving our insights. The human element is very strong with everything we are doing.

“The kind of people [at Wavemaker] have very interesting and unique capabilities. We have one person who comes from a journalism background. We have another person who is a real-time visualiser, who creates content around trends. And then you have somebody who enjoys sports. So he will be looking for partnerships and will be making content to make partnerships with the mind-set of a sports person.”

She adds: “There isn’t a university degree that qualifies who to be part of the team. Unique talents, aspiration points and passions, and that is what we are doing. You need to have very strong entrepreneurial skills.”

Nambiar chips in: “Creative is certainly going to be a component and we are the champions of creating a story out of numbers and a meaningful conversation out of research. Creative people certainly need to be there. But are they the high calibre of the well-celebrated? We don’t have a pre-conceived state of what we need to create because the journey will tell us what we need to create.”

At present Wavemaker is made up of 20 people, most of whom are based in Dubai Media City, with three others scattered across Kuwait, Egypt and Saudi Arabia, and further team growth is expected in the long-run. So could that be the future of the advertising industry – a hodgepodge of content created by people whose main qualification is a liking for sport? Well perhaps, unless some of the industry’s creative talents get their acts together, believes Nambiar. “Creative agencies are still going to be there, but they really need to understand what is going on around the region and the world, and around the consumption habits,” he says. “I do think that – no offence to creative agencies – they missed the bus when it comes to digital. You wouldn’t see so many social and digital agencies in place; these agencies could have been the champions because that’s where it is going. If they get it right then creative agencies will stay, but the reason media agencies are getting into content is because we know the consumers and we are closer to them. So therefore we are able to provide solutions that can be measured and that we can contribute to the clients’ business needs.”