Beyond the blockbusters: where to watch independent cinema in Dubai 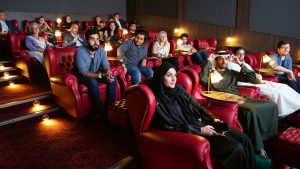 It seems like there are more places than ever to watch alternative cinema in Dubai today. You can go to one of Cinema Akil’s pop-ups, or its new, semi-permanent home in Alserkal Avenue. In the same artsy complex, Locomotion shows documentaries at the Jamjar art space. The decade-old Scene Club holds a couple of screenings a month in
Roxy Cinemas’ plush auditoriums; it has recently moved from its previous base at Vox, Mall of the Emirates, which is now home to Dubai International Film Festival spin-off DIFF365.

With Hollywood following a safe path of franchises, sequels, prequels, remakes and adaptations, many cinema goers are happy to find an alternative to more of the same in the mainstream cinema chains.

“Keep in mind that when it comes to cinema in the UAE it is very much a distributor game,” says Jean Marc Bled, general manager of leisure and entertainment at Meraas holding, which in January launched its own Roxy brand of theatres at its
Dubai developments including The Beach at JBR, City Walk and Box Park. “What they offer us is up to us to show or not, but the fact is for the moment the choice is quite limited when it comes to independent movies.”

This means distributors sometimes say no if a cinema asks for offbeat films. Their risk aversion is understandable, given that cinemas must be fluid with their programming to meet customer demand and maximise their ticket sales.

“We don’t take much risk because it is a revenue share [with the distributors],” says Bled. “We are not paying anything up front. They are giving us the movie, and if we see that it doesn’t perform well, we are free to reduce the amount of screenings we are doing to improve something else. It’s something very fluid and we play it by ear, really.”

Cinemas do show non-mainstream films, and always have done. Bled cites the recent Tupac Shakur biopic All Eyez on Me as a recent success, and cinemas have taken to showcasing Oscar nominees. But Hollywood movies tend to receive more hype and arthouse offerings can fly under the radar.

The Middle East is a healthy market for cinema compared with other parts of the world, says Bled. “The amount spent in cinemas here is really unprecedented,” he says. “There are still a lot of cinemas and they are going strong, and people are going out very frequently to the movies. That is really good, positive stuff, so therefore we need to show them more content and more things to see.”

Managing director of Dubai International Film Festival Shivani Pandya, agrees. She says: “Box office admissions in this part of the world are rising quite fast, and the UAE has the highest box office admissions in MENA. … It’s getting a lot of visibility, a lot of studios are looking at the region and have been working with us and speaking with us.”

Since January, the festival’s DIFF365 has begun programming 26 films a year, or about one a fortnight, at the Mall of the Emirates’ Vox multiplex.

“It was something that we came up with because at the festival now we show a great number of films and there is a huge variety from different parts of the world and different kinds of films,” says Pandya. “We are invariably running at very high
occupancy and full houses … and a lot of people in their feedback asked where were these films for the rest of the year?”

Filmmaker Nayla al Khaja launched the Scene Club about 10 years ago, under the patronage of DIFF. She says: “I am proud to say we were the first film club in the country that showcased independent films from all around the world.”

Back then it started showing films once a month to a 500-seat auditorium, which was packed. So it doubled its screenings to accommodate 1,000 people a month. The seats were still full. Scene Club built up a loyal following showing films for free first at Ductacc community theatre, and then in the Knowledge Village auditorium, before moving to a ‘real’ cinema at Vox.

There, for the first time, Al Khaja had to charge a membership fee to cover expenses. Until then, the cost of licensing films and having them cleared by the National Media Council’s censors had been covered by a variety of sponsors.

“For eight years I held the fort and I was able to screen for free, which for me is a big achievement,” says Al Khaja. “Really I had a lot of sponsors, and it’s not even big money but they all added up and I was able to keep the lights on, so to speak. It
was fantastic.”

Those sponsors included Caffe Nero, National Bank of Dubai, Royal Mirage, Dubai Culture, Sport 360 newspaper and DIFF itself. “I had a really weird mix of sponsors dropping in and out, so that was really fun,” says Al Khaja.

Now Scene Club hosts its screenings at Roxy, where they are once again free. They are also extremely plush. “People feel super spoiled and comfy when they are there,” says Al Khaja. To sink into those deep seats and enjoy a movie with the high-end Dolby sound system could cost upwards of AED100 on other nights.

Just as well known and popular as Scene Club is Cinema Akil, founded in July 2014 by local entrepreneur Butheina Kazim. But while Scene Club and DIFF365 tend to show contemporary films from the festival circuit, Cinema Akil’s schedule has ranged from the 1922 horror Nosferatu to Paris Can Wait, released this year.

While Kazim works on establishing a permanent space for her cinema, she has operated it as a pop-up, often using a commission-based funding model through partnerships with events such as Sole DXB and the Dubai Shopping Festival. Last year she told Campaign: “I’ve become obsessed with the idea of cinema everywhere, so every time I see a space I’m like how can I turn this into a cinema experience?” Cinema Akil has popped up in basketball courts, shipping containers and the warehouses of the industrial-hipster Al Quoz area.

All cinemas face costs to screen their films. For the mainstream cinemas the price of licensing, subtitling (which is mandatory if movies are screened commercially), clearance by government censors, and the editing sometimes required to get censor clearance, are largely borne by distributors (as are marketing and advertising), but the independents often have to cover their costs alone.

Cinema Akil has formed many partnerships over the years, and Scene has always had its sponsors; currently the costs – approximately AED5,000 for licensing and clearance – are shared by Al Khaja’s D-seven film company and Roxy, but the club is always on the lookout for sponsors keen to promote independent cinema to a discerning audience.

DIFF365 charges for tickets but also has a big-name sponsor, the telecoms company Du, and Pandya says it could not do without that backing.

“Films are expensive, so Du has actually enabled us to create this initiative,” she says. If they weren’t there it would have been fairly difficult. We hope that eventually it will be something that will be funding itself and there will be more and more people participating and watching, but right now it’s not, and that’s the reality of it.” That day is “not very far away”, though.

All the films at DIFF365 are subtitled in Arabic (those that aren’t made in Arabic, that is), which adds another cost. Since Roxy is free, and Cinema Akil works on a set donation at the door, they are able to sidestep this expense.

The Scene Club has two guiding principles when choosing films. They have to be current and good, and they cannot be cut. Luckily, says Al Khaja, “We always ask the National Media Council to be lenient with us. They have been really, really cooperative.” Her audience is mature both in age – most are over 40 – and sentiment. “They just like a bit of fine dining when it comes to filmmaking, cinema that is good for the soul, so to speak.”

Alternative cinema experiences offer something more to cinephiles. They may not always offer the largest screens, most high-tech sound systems or even the comfiest chairs (Al Khaja says Scene has gained some stragglers whose backs can’t cope with Akil’s bean bags). But they offer something more in other ways. They offer a social experience, a chance to mingle and talk film with other audience members, as well as contextual introductions and staged discussions after the films, often involving directors or others involved with the productions.

The Scene Club for five months has been running a Made in the UAE programme, where it invites in four people involved in making a film shot locally. They each talk for 15 minutes “not about the experience, but about the practicalities of what they do,” says Al Khaja. Then the club shows an extract from the film. The programme has understandably proved popular among the local filmmaking community.

And because alternative cinema screenings tend to attract a more dedicated following, mainstream cinemas that support them can preview, test and showcase upcoming films, and can combine databases to reach a more discerning audience. As distributors control marketing budgets, these collaborations also give better word-of-mouth and social reach.

So if you are growing bored of the same old blockbusters, don’t despair. There are alternatives out there. There always have been, but they are becoming more prominent. And the more that audiences support indie cinema, be it at multiplexes or in warehouses, the more great movies will make it to Dubai’s screens.

Omnichannel or multichannel? Which one, why and how? By Karan Kukreja, Phygital Now

The New Marketing: An open day from your living room, by UOWD’s Brendan Michael Vyner

The New Marketing: Be agile and ready to pivot – by Property Finder’s Alastair Sherriffs

Case Study: Galaxy Dates x Anghami – A Fusion That Sounded So Good You Can Taste It!