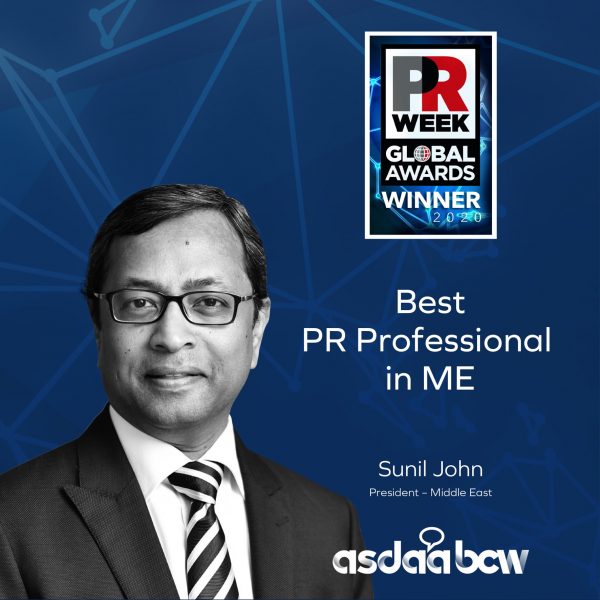 This latest individual award for John from the global PR industry coincides with the 20th anniversary year of ASDA’A, the agency he founded. He is credited with transforming PR from a communications function struggling under the shadow of big advertising agencies “to a thriving industry that attracts global capital and talent to the Middle East,” according to PRWeek. Other judges’ comments highlighted his role as “a renowned expert in the region, a true leader with a point of view on all things communications and business related.”

Under John’s leadership, ASDA’A BCW’s achievements include being part of the team which launched the tallest tower in the world, Burj Khalifa in Dubai in 2010, and supporting the UAE in its bids to host Expo 2020 Dubai and Special Olympics World Games in Abu Dhabi.  John is also the driving force behind the annual ASDA’A BCW Arab Youth Survey – the largest and longest running research into the region’s largest and most important demographic, its youth. The 2019 edition of the survey, titled ‘A Call for Reform’ was shortlisted in the PRWeek Global Citizenship Award.

ASDA’A BCW was also Highly Commended in the Middle East Agency of the Year category. Judges noted how the agency used the formation of Burson Cohn & Wolfe (BCW) in 2018, following the merger of two of WPP’s biggest public relations brands Burson-Marsteller and Cohn & Wolfe as, “a springboard to adopt new methodologies, focusing on culture and training.”

ASDA’A BCW has continued to grow through its five specialist practices: Consumer & Healthcare, Corporate, Enterprise & Technology, Financial and Public Affairs from small shoots as ASDA’A in 2000. It is now the only Middle East geography reporting directly to worldwide among any international PR agency and John, as President-Middle East, has a seat on the BCW global board. John also leads two additional subsidiary brands in the Middle East: Proof, spanning design, digital and social; and PSB Middle East, the research specialists.

This prestigious global award from PRWeek is the fourth individual industry award for John, following the SABRE Award for Outstanding Individual Achievement in 2014, and two MEPRA awards, including the Chairman’s Award in 2016 and the inaugural MEPRA Fellowship in 2018. He was also invited to join the Arthur W Page society in 2019. In 2018, he was named among the ‘Arabian Business 100 Inspiring leaders in the Middle East’ and was ‘Arabian Business 100 influential people helping shape the Emirate’.