94 per cent of UAE marketeers acknowledge the importance of influencer marketing to enhance their brand: BPG Cohn & Wolfe survey 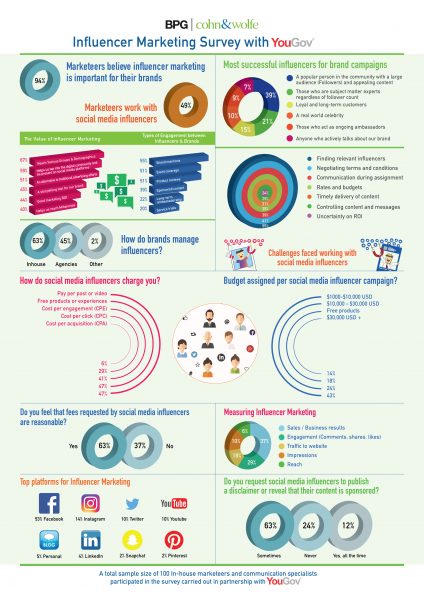 New data from the second edition of the BPG Cohn & Wolfe Influencers Survey, in association with YouGov, showed that almost half – 49 per cent – of those polled currently work with social media influencers in the region to market their brand. This represents a significant shift from traditional advertising methods.

The survey interviewed over 100 in-house marketing and communication experts and brand managers across a diverse range of industries in the UAE to assess current trends in the use of social media influencers in marketing programmes.

A vast majority of brands believe that influencer marketing enabled them to tap into the digital community and more effectively reach their target audience. They also believe that it resulted in a good marketing return on investment (ROI).

BPG Cohn & Wolfe is the strategic public relations business of the BPG Group, one of the region’s longest established larger integrated marketing communications businesses, and commenting on the results Group CEO Avi Bhojani said: “Brands are now, more than ever before, relying on creative new ways to tell their story in a highly competitive landscape and are using social media influencers as a key part of their overall marketing strategy. The findings from our survey reveal that a majority of consumer brands in the UAE believe that they can reach the right target audience if they work with social media influencers.”

Taghreed Oraibi, BPG Cohn & Wolfe PR Director – Consumer Practice, added :“Almost half of all brands, 45 per cent, said they have appointed agencies to manage social media influencers, while 63 per cent use an influencer directory to source influencers’ contacts and manage the engagement themselves. It shows that the market is definitely getting more sophisticated and focused on using digital platforms for customer engagement and conversations.”

Participating brands also identified some of the key attributes they looked for in social media influencers. Topping the list at 39 per cent was that the influencer must be a popular person in the community and have a large following and appealing content.

But the biggest challenge identified by brands was “finding relevant influencers” that topped the list at 55 per cent. This was followed by “negotiating terms and conditions” at 41 per cent, and “communicating during an assignment” at 39 per cent.

The survey also revealed that a majority of influencers expect to be compensated based on the number of deliverables (posts, images, videos, etc.), rather than the success of a campaign through actual and measurable results (driving up sales, website visits, etc.). Only six per cent of marketeers said that they compensated influencers based on such results or Cost Per Acquisition (CPA).

Openness and transparency are also emerging trends as 63 per cent of brands say they occasionally request social media influencers to publish a disclaimer or reveal that their content is sponsored. However 24 per cent never require it and 12 per cent find it necessary to add a disclaimer through a statement or the use of hashtags such as #Ad or #sponsored.

Taghreed Oraibi added: “The results of our second survey have reinforced the results of our 2016 survey and further demonstrate the enormous impact that social media influencers have on marketing strategies and budgets in the UAE.”