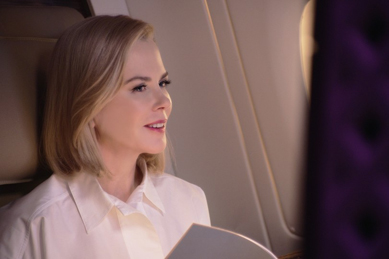 Hollywood star Nicole Kidman is back as the face of Etihad Airways’ latest advertising campaign  a 360-degree virtual reality film.

The five-minute film, Reimagine, will give viewers a panoramic look at the airline’s  Airbus A380 luxury surroundings following the Oscar-winning actress, who became the face of Etihad last year, while she tours the aircraft at it flies between New York and Abu Dhabi.

The movie, which took six months to produce and was filmed in Abu Dhabi, shows Kidman speaking directly to the camera, as she rehearses scenes from the script of a film aboard the twin-decked airline.

Viewers are also given the viewer the chance to interact with several characters, including Kidman’s film director, an opera singer and an Emirati guest with a falcon in the first-class cabin on the Airbus.
The concept is the work of Cheil Worldwide, with input from its digital agency The Barbarian Group.
The feature-film was directed by Anthony Atanasio and Valerie Martinez, who directed Etihad’s first television commercial starring Kidman in the Residence suite on Etihad Airways’s first Airbus A380.