WARC’s health of creativity: 39 per cent of highly awarded campaigns for creativity, as featured in the WARC Creative 100, compared to just 18 per cent of all creative winners are also awarded for effectiveness. 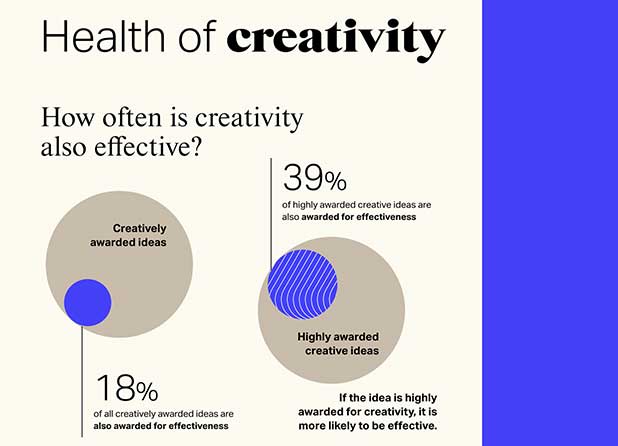 Each year, WARC tracks the results of the top global and regional award shows for creativity, media and effectiveness for the WARC Rankings, the ultimate benchmark for advertising.

To assess how often creative work is also effective, and to uncover the main characteristics of ideas that are highly awarded for both creativity and effectiveness, WARC has analysed the results data from the creative and effectiveness awards shows tracked by WARC Rankings between 2015 and 2019. The findings are now published in WARC’s latest research, The Health of Creativity.

Amy Rodgers, managing editor, research and rankings, WARC, comments: “There’s been a lot of discussion around the effect of short-term strategies on long-term brand health.

“With this in mind, we’ve compared data from the WARC Rankings to see how many creative ideas were subsequently awarded for effectiveness, and if highly awarded campaigns for creativity were more likely to be effective, i.e. if awarded creativity increases, does effectiveness do the same? We also wanted to surface any insights from these highly successful ideas to help brands and agencies going forward.”

A total of 2,391 creatively awarded ideas from around the world were analysed by WARC, of which only 18% (431) were subsequently awarded for effectiveness.

However, when comparing highly awarded ideas for creativity, i.e. the 415 ideas that have made it into the WARC Creative 100 Rankings between 2015-2019, the proportion of these ideas that were subsequently awarded for effectiveness, rose to 39% (162).

These 71 best of the best ideas, were analysed with the following five characteristics emerging:

Creative commitment, a new planning tool and composite measure introduced in The Effectiveness Code, a 2020 report from WARC and LIONS, correlates very tightly with effectiveness. Campaigns are more effective in terms of sales, brand building, market share and profit, the longer their duration, the more numerous their media channels, and the higher their overall spend.

This new Health of Creativity report shows that highly creative and effective ideas, i.e. those ranked in both WARC’s Creative 100 and Effective 100, have a higher level of creative commitment (7.7) compared to other awarded campaigns (5.9).

In terms of sectors, findings included in the report revealed that over half (57%) of the highly creative ideas from the telecommunications sector were also awarded for effectiveness. 55% of pharma & healthcare and 50% of financial services ideas were also effective.

Health of Creativity follows the recent publication of Marketing Through Volatility, a series of reports uncovering key creative, media and effective insights from the most awarded campaigns of 2020 so far, as well as the strategies of brands that were notable in their response to the volatility of the past 12 months. Download here a sample of these reports. 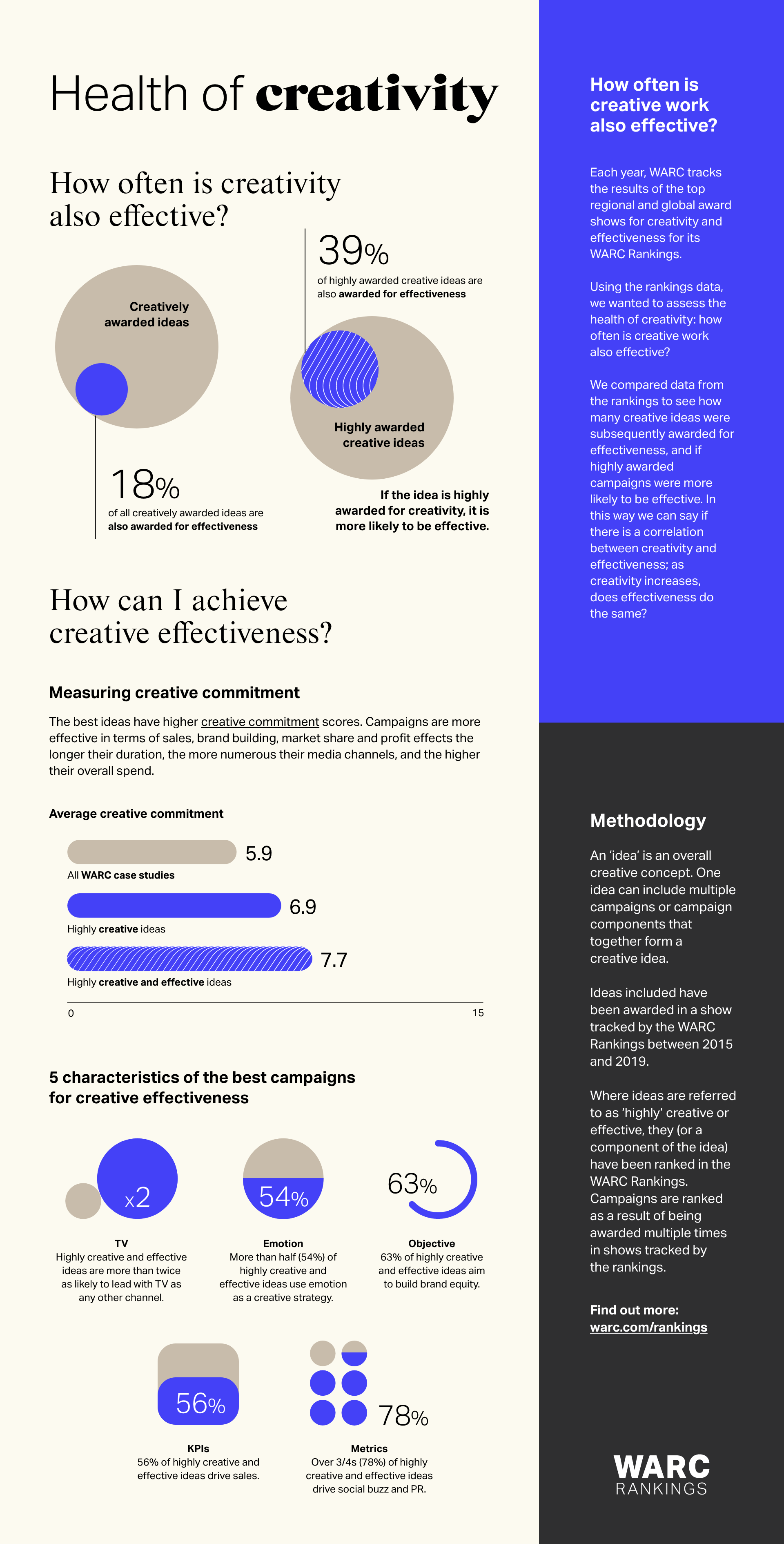