Make the most out of your mobile branding budget 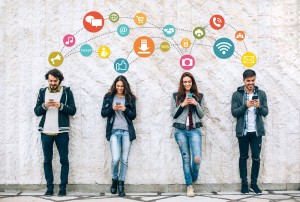 The total MENA ad market in 2015 was worth an estimated $5.5 billion in net advertising revenues, reported the NU-Q Ad Revenues Estimate. Of this, digital represents 10 per cent of ad spend, compared with 30–35 per cent spend on print, while the vast majority of revenue is in television.

Within the digital market, mobile spend accounts for about 20 per cent of digital ad revenues, a small share compared with its potential reach, according to Media Industries in the Middle East 2016, a report authored by Northwestern University in Qatar in partnership with the Doha Film Institute.

In MENA, despite very high smartphone usage, especially in the GCC, the region has been slow to adopt mobile-specific ads – despite their proven impact. Industry practitioners estimate that no more than 6 per cent of total ad spend is dedicated to mobile platforms, even though 70 per cent of ads viewed are on mobile. Meanwhile, marketers in the US are allocating more than 50 per cent of spend to mobile, versus desktop.

What this means, however, is that for those marketing pioneers prioritising mobile as part of their advertising strategy, there is boundless opportunity. According to Media Industries in the Middle East 2016, the MENA region has seen a 60 per cent increase in traffic in certain verticals, such as online video generated by mobile. Mobile should, therefore, be an integral part of the content delivery strategy for providers across the region.

Mobile advertising is clearly still an emerging channel in the GCC, but here are six steps to optimise your mobile branding campaigns.

Don’t pay for ads that are unlikely ever to be seen. Ad effectiveness is significantly dependent on how long an ad is displayed on a user’s screen. Anything that is viewable for less than 14 seconds is unlikely to be looked at for even a second. So improving viewability rates is an important first step to ensure your display investment isn’t being wasted. There are several ways to do this. Most simply, larger ad formats achieve higher viewability rates. However, 95 per cent of mobile screens currently in use globally are less than 410px wide and less than 600px tall, which results in banners over 350px resolution simply being stripped out. Responsive design executions automatically adapt to the screen size, which improves viewability rates. New technology that makes ads scroll the page with the user allows advertisers to keep their brand messaging in view at all times, increasing engagement and brand recall. Smart loading technology ensures that ads aren’t delivered too early or too late during the user’s presence on a website. These tools are all available; we just need to employ them.

Simple forms of display advertising can be turned around relatively quickly and cheaply – a strategy that seems appealing at first glance. A closer look, however, reveals that this kind of basic advertising elicits minimal attention from the user. Even within the range of high-impact rich-media advertising, different formats and ad environments achieve vastly different levels of attention, we found when we researched our InSkin Visual Engagement report. The data indicates that larger ad formats, especially page take-overs and scrolling sidebars, are looked at for a significantly longer period than smaller ones. Here, too, larger ad formats deliver better results. Another relevant factor is the number of simultaneously displayed ads. Smaller banner formats can’t compete in environments that are cluttered with other ads: they are 37 per cent less likely to be looked at than ads in uncluttered environments, and therefore less likely to be effective.

Even the most powerful strategy is worthless if the creative itself doesn’t attract the user’s attention. If your assets aren’t beautiful, they’re unlikely to be looked at. How much attention a certain format may achieve can vary from campaign to campaign by up to 52 per cent, depending on creative execution. Our research shows that even if an ad is viewable, it still must be worth a glance to be effective. Especially on a smartphone, advertising needs to pique the user’s interest within a short window of time while he/she is looking for quick information. Striking design and creative execution are crucial, as well as rich-media animation, which will bring your creative to life.

4: Increase the relevance of your ads

5: Streamline your online campaigns with a cross-device approach

While “mobile first” is a trend that marketers can’t afford to ignore, “mobile only” is a missed opportunity. If you have already created all the assets for a great display campaign, you should make the most of them. A fully integrated cross-device campaign with device-optimised creative has the advantage of reaching the user in various different usage situations, such as on the go while browsing on their smartphone, relaxing on the couch or second-screening on a tablet, or in research mode via desktop PC or laptop. The
user will be in a different mood
and mindset in each of those situations, so maximising your
ad’s presence on different screens increases the likelihood of the user being receptive.

Let’s be honest, a lot of mobile advertising is a bit of a nuisance, especially the non-skippable variety, elements that obscure content, or those where the close button is hidden. Endless retargeting has been shown to be perceived as annoying and even creepy. For desktop delivery, advertising is already improving thanks to restrictions and best-practice guides provided by trade bodies like the US-based Interactive Advertising Bureau and Media Ratings Council. On smartphones, however, there are lots of examples of ads that are intrusive, annoying or inconvenience the user. We have to put ourselves in the user’s shoes and focus on making the ad experience as pleasant as possible. So if we deliver a video ad as autoplay, then at least it should be without sound. If we insist on hiding content through interstitial formats, then it should be easy to close. Instead of directing the user away from the content he/she is trying to read by hyperlinking entire banners, a microsite is a useful tool for displaying additional content and allowing interaction, and a specific call to action can direct those willing to learn more to the desired destination.

Mobile advertising, if done right, can be an invaluable tool to the modern marketer. The huge array of new technology enables us not only to reach our target audience at times when they are most receptive, but also to measure its success. It is important, however, to keep the user front and central in the process.

Toby Daniell is head of InSkin Media in the MENA region.