Digital futurist Brian Solis says the technology behind psychographic marketing can be used for good, evil or advertising 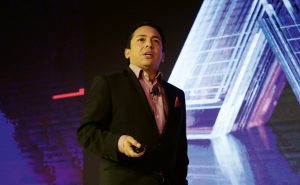 Brian Solis is principal analyst at Altimeter Group in the US, where he studies disruptive technology. He was introduced at last month’s OMD Predicts event in Dubai as “a keynote speaker, digital anthropologist and futurist,”and he has always looked at how technology affects society.

He began his career looking at ways to bypass the media most people were consuming in the early to mid-1990s. “I moved to Silicon Valley in 1996,” he says. The internet was growing more pervasive and “we started to see the onset of the consumerisation of technologies, and that led to a lot of experimentation. A lot of that experimentation was: could we bypass traditional intermediaries and go directly to people through [chat forums and message boards]?”

That sort of thinking spread throughout the Valley and gradually gave birth to social media. Today much of people’s news and information is gleaned not through television, radio and newspapers but through platforms such as Facebook, YouTube and Twitter.

People are using these channels on the go, through mobile phones in what Google likes to call ‘micromoments’. Solis says those micromoments are “really upsetting the balance” of marketing and “democratising branding”.

He explains: “In our research we found when people reach for their phone to make a decision [about where to go to dinner, for example], 90 per cent of people in that moment are looking for information without a brand in mind, per se. And 73 per cent make a decision about who they are going to work with or buy based on the information they find.”

That information isn’t necessarily from a website, he adds: “It’s from a YouTube video or an Amazon review.”

Today Solis says marketers should be wary of trying to pull people away from how they choose to connect.

“You can judge phone over-immersion all you want,” he told the audience at the OMD Predicts conference. “But that’s not going to change it”.

At the same event, marketing consultant Martin Lindstrom lamented that now we have smartphones we seldom get bored. Rather than looking around, pondering random thoughts or talking to strangers when we have down-time, we are more likely to check our screens.

And Solis also worries, telling Campaign: “As we heard Martin Lindstrom talk about, boredom and downtime are now being filled with connectivity, and that keeps us moving to the next, moving to the next…” He snaps his fingers on each “next”, but stops when he says: “I think we need time for reflection. At the end of the day we have other things that define who we are, and we have to bring that back online.”

We need to re-learn to connect better as people. Speaking on a day Mexico was rocked by a massive earthquake, and hurricanes were hitting the mainland US and its territory of Puerto Rico, he says: “I have a good friend who lost all her belongings and home in the Houston floods. And to see our community of friends help her out and bring her back to a home, you can see humanity can be good when technology is used.”

Even in the less selfless world of marketing, we can use cutting-edge data crunching to make things a little better. “Imagine if we are using the same techniques at scale, or branding at scale, that is more human or aspirational,” he says.

This shift all begins with “being smart about who we are and then bringing that back to work on how we control information and don’t let information control us”.

On the stage, he suggested: “What if a brand was built upon somatic markers, upon the things that you felt and that you shared because they meant something to you?”

This philosophy is of its time, he adds: “We are now living in an era where the experiences are the product; it’s more important than stuff.”

For this reason, smartly designed retail stores are more Instagrammable.

Kodak is often held up as a brand that didn’t evolve with the times, but often the reasons given for its decline stop at it failure to adapt to the old technology of film being surpassed by digital cameras and then smartphones.

Solis goes further, saying: “What happened to The Kodak Moment is we … stopped taking those pictures and using them as memories. Now our pictures become real-time experiences … or they become ephemeral. But they are just instances, and Kodak lost touch with what The Kodak Moment meant to a new generation of customers.”

He cites the Canadian academic Marshall McLuhan, who declared: “The medium is the message.” This applies today not only to the selfie culture of smartphone photography, but to social media in general.

“About 10 years ago I wrote a paper for a secret government entity that talked about how at some point social media could be used in ways to create information that– going back to bypassing the traditional intermediaries – could reach people directly and influence their perceptions and behaviours,” says Solis.

Much of what he anticipated a decade ago has since been used by the likes of Cambridge Analytica, the psychographic marketing firm that helped Donald Trump win last year’s US presidential election through microtargeting of voters, and may have been instrumental in steering the UK to vote to leave the European Union.

“I wrote that paper on a positive note, that we could do good for the world,” says Solis. “But I was interested to see how that [Trump’s] exact playbook was the opposite of that, in that we were using fake news, we were using consumer data and psychographic data as a way of creating content that could manipulate [voters] based on their weak points.”

Using psychographic data to sell products or to influence voters is ethically different, though, he says. “I think at the end of the day [the social networks that colluded] liked the revenue and the ability to show the muscle of Facebook with its own internet, if you will. In those cases there were moral challenges, and I think that’s what’s different from [selling] a soft drink.”

People are understandably much more cynical and sceptical now about their manipulation by marketers, through social
media and the distribution of false information.

“But the problem is that [people] don’t know when they are being manipulated,” says Solis. “I hate to say that, but [the techniques] are so compelling, so efficient and so effective that it is scary. And, as I said as a result when I wrote that original paper, with this technology comes great responsibility.”

People are aware that fake news exists, but not necessarily when they are being manipulated by marketers and propagandists through social media. “Unfortunately, nobody is really unifying against it,” says Solis. “There’s a lot of little disparate things, but we are learning every day just how deep this was within Facebook, that the Facebook team met with the Trump campaign, that they helped guide the strategies, and that the YouTube team helped guide these strategies.”

But Solis still maintains he is an optimist.

“We need to learn and unlearn a bit about what’s happening, and to be a bit more open minded and maybe embrace a bit more critical thinking, which is so difficult to do,” he says.