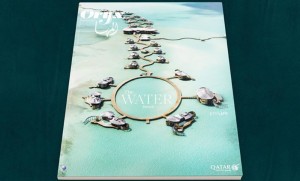 London-based travel media company Ink is to take over production of Qatar Airways’ in-flight magazine Oryx, with its first issue appearing on January 1.

In an interview with Arab News, Ink’s joint CEO Michael Keating said: “What we’re doing is massively upgrading the magazine; it’s going to be much more premium in feel.”

“We do know the region,” Keating told Arab News. “But the difference with Qatar is that it is global. So whilst there will be some ad sales coming out of the region, it’s not relying solely on the Middle East in terms of getting the advertising in.”
Ink will have a couple of sales people based in the region, but will mainly sell advertising for Oryx out of London.
Oryx was previously published by Agency Fish, which has offices in London, Jakarta and Perth, Australia.