Khatron Ke Khiladi will premiere on 17th July and air every Saturday and Sunday at 9.30 pm UAE | 8:30 PM KSA on COLORS TV. 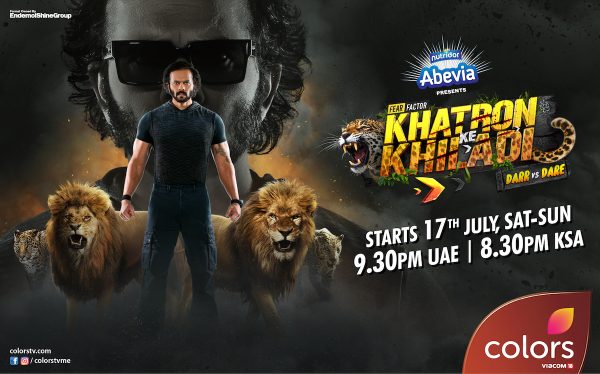 Wherever there is fear, there are always daredevil Khiladis ready to face it head-on. The destination of unlimited action, thrill, and adventure, India’s biggest stunt-based reality show Nutridor Abevia presents Khatron Ke Khiladi- Darr vs Dare is set to return on COLORS. The breathtaking locales of Cape Town will manifest into Darr aur Dare Ka Battleground wherein an eclectic mix of 13 warriors will face their deepest fears and worst nightmares. The stunt master Rohit Shetty will reign supreme as the host of the season, throwing some dangerous and unimaginable challenges at the contestants. Produced by Endemol Shine India, Khatron Ke Khiladi Darr vs Dare will premiere on 17th July 2021 and air Saturday and Sunday at 9.30 pm UAE / 8:30 PM KSA on COLORS TV.

Turning their strength and tenacity into armours and putting up a big fight will be the contestants, Bijli Boy Arjun Bijlani, Bahu Rani turned Magar Rani Divyanka Tripathi, Gyaani Baba Abhinav Shukla, mytho king Sourabh Raj Jain, Darr ki Maari Shweta Tiwari, Karan Arjun of the season Varun Sood and Vishal Aditya Singh, singer Rahul Vaidya, the effervescent Nikki Tamboli, Naagin gin gin singer Aastha Gill, the energetic Mahek Chahel, actor and digital sensation Anushka Sen and Sana Makbul. With Cape Town making for a perfect setting for some action, the new season will see a whole new breed of dare warriors fighting some of the deadliest of animals including lions, crocodiles, cheetahs and performing larger than life stunts.  The action Maverick Rohit Shetty will be seen throwing arduous challenges at the contestants like getting fired through a cannon, performing aerial acts, getting electrocuted to having face-offs with wild animals that they will have to overcome.  In the picturesque Cape Town, Divyanka will be seen overcoming her fear of crocodiles, Rahul Vaidya will be seen facing his fear of water, Vishal Aditya Singh will be seen doing underwater act while Nikki Tamboli will tackle creepy crawlies and much more. In his action element, Rohit Shetty will be seen racing a Cheetah and performing a bike and aeroplane combo stunt.

Nina Elavia Jaipuria – Head, Hindi Mass Entertainment and Kids TV Network, Viacom18, said, “We at COLORS continue to present differentiated and variety content to our across various genres. After our latest announcement and the newest addition, the visual-based quiz show- The Big Picture, we are thrilled to bring a new season Khatron Ke Khiladi. The exciting season of the stunt-based reality show has been shot in Cape Town with some of the biggest names in the industry. With some exceptional showcase of talent in Dance Deewane at 8 pm and a new thrilling season of Khatron Ke Khiladi at 9.30 pm, we aim to fortify our weekends and offer wholesome entertainment to our viewers.”

Speaking on the launch, Manisha Sharma, chief content officer, Hindi Mass Entertainment said, “Khatron Ke Khiladi has been raising the bar of adventure, action and entertainment with each passing year and written many success stories. In the background of Cape Town, the new season will get bigger and better with some larger-than-life stunts featuring deadly animals that have never been seen before on the show. We are delighted to have the action expert Rohit Shetty join us for another exciting season along with 13 exceptional contestants.”

Govind Shahi, executive vice president, IndiaCast Media said, “Khatron Ke Khiladi is extremely popular amongst our South Asian viewers. We are sure that that this new season will bring edge-of-the-seat and adrenaline filled entertainment like never before. With two of our blockbuster reality shows, we aim to provide a wholesome experience to our viewers –  Dance Deewane, which will air at 8 PM UAE and Khatron Ke Khiladi at 9:30 PM UAE, starting 17th July every Saturday & Sunday.”

The action dynamite and show’s host, Rohit Shetty said, “This season of Khatron Ke Khiladi is extremely special, as 7 years ago I started my journey as the host of the show in Cape Town and we are back in South Africa for a brand-new season. The thrill quotient will be at an all-time high as the new season will have some action-packed and pain-inducing stunts that the contestants will have to endure. As the beautiful Cape Town turns into a battleground, the Darr Ke Warriors will be tested and scrutinized at every step of the way and only the real warrior will survive.”

Abhishek Rege, CEO, Endemol Shine India said, “Khatron Ke Khiladi is one of the most thrilling, exciting and entertaining reality shows on Indian television today. With each passing year, Endemol Shine India has ensured that the entertainment quotient only increases. This year the stunts have been mounted on an even greater scale in Cape Town, South Africa, and have been specially designed to test the courage and fortitude of our ever-popular contestants, under the watchful eye of Rohit Shetty.  All through the shoot, strict safety protocols and SOPs were maintained by everyone on set. So, prepare yourself for another season of the edge of the seat action.”

Focused on the theme of Darr vs Dare, the channel has planned a robust marketing outreach across print, television and digital for the launch of an exciting new season. Along with high impact print ads, there will also be heavy promotions on the network and non-network channels. On the social media front, the promotions will be driven through a mix of gifs, videos, quizzes, and reels featuring Rohit Shetty and the contestants.

Nutridor Abevia presents Khatron Ke Khiladi – Darr vs Dare bringing the next level of DARR. 13 warriors gear up to take over the battleground starting 17th July 2021, every Saturday and Sunday at 9.30 pm UAE on COLORS.