Anghami wanted to get a status check on how the Middle East has been consuming music during the Covid19 pandemic and ensuring social distancing & work from home shifts. They have analyzed streams between March 1 and April 1 across territories and have discovered many new patterns. Here is what they shared: 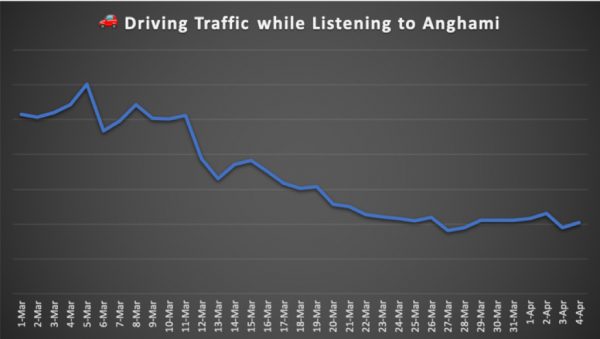 Driving while listening to music started dropping in Lebanon as of March 10, in Saudi Arabia, Egypt & Kuwait as of March 13, in Iraq as of March 18, USA as of March 23 and Australia as of March 26 – average a whooping 65% drop. The dates almost match the restrictions introduced by the governments of the respective countries. Some people are still driving albeit less frequently.

Less driving, meant also less 3G traffic, and we did see an average drop of 50% usage on mobile networks! Yup, everyone is using Wifi more than usual. Work from Home also means more people are listening on their computers, 20% more. 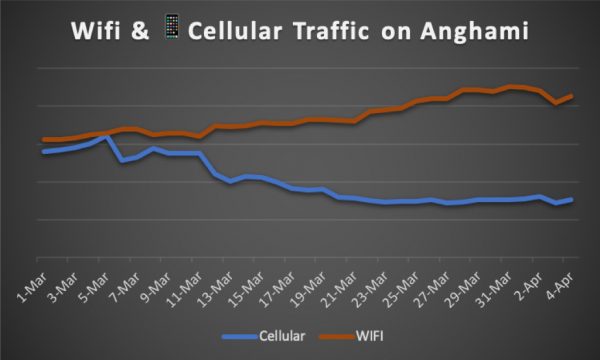 People listening to music while walking did drop but less abruptly, as some are still walking, around 45% originally, but then as people started working out at home, it’s currently around 20% lower than the norm, but hey we have much more #StayHome adherents, which is exactly what we need right now.

The pandemic created some shifts in wake up times, as morning music used to start at 8 AM (GMT +3), and now it’s happening at 10 AM (GMT+3), are you sleeping 2 hours more? Not really, people are listening to more music past the normal bedtime, a lot more people are staying awake till midnight with music.

Clearly, many are having a hard time sleeping and more sleeping music is being used past midnight than before.  Funny enough, it seems your babies are staying later than usual ? Baby sleeping music such as Sea Sound for Sushing Baby and White Noise for Baby Sleep are spiking at night

Cooking was never en vogue as now, are you making that banana bread that’s flooding instagram? Listening to cooking playlists DOUBLED between 1 March and 1 April, our favorite is Cooking Jams. You also can listen to it without cooking!

An interesting song getting shared was Contaminated, luckily our music is shared remotely. 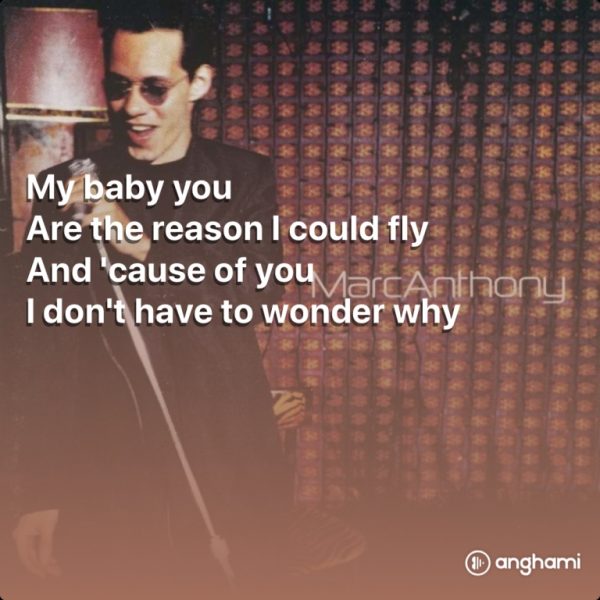 Sharing music with others is on an uptick, you definitely are sharing more songs, 29% more actually. Songs that are getting shared indicate missing each other, multiple songs with similar meaning words, a few songs to mention :اشتقتلك – ابراهيم الحكمي, شيرين عبدالوهاب – بتوحشني, My Baby You – Marc Anthony, Your Man – Josh Turner.

We didn’t quite expect it, but it makes sense that we saw more people searching for religious content and prayers. After all, God unites us all.

On the light side, people got the Netflix bug, many songs from series trended, our favorite is from Elite Season 2, Out of Touch by CUT_. This also means more TV, and indeed, Anghami apps on TVs got much more usage than regular, +30% more.

The younger bunch was busy – we hear, and we can confirm that many songs from TikTok challenges spiked, don’t blame us for Skechers by DripReport, Supalonely by BENEE,  Solteroski by Los Solteroski,  Abusadamente by MC Gustta & MC DG, Astronomia by Vicetone & Tony Igy.

On the podcasts scene, we saw people listening less because of less commute activity, which makes perfect sense when people haven’t yet adjusted. However, Corona podcasts such as CNN – Coronavirus: Fact vs Fiction did get traction, also podcasts revolving on stories such as Artcoffe podcast & Vikings: The Nine Realms found a new audience.

All in all, the last few weeks have been a roller coaster on everyone, it’s hard to get in tune with the new normal. While music streaming dropped 10 to 15% over the initial first couple of weeks, it’s indicative that many are adapting to COVID19 and creating a new way of consumption.

On that, let’s end with a video that was created by 8eme Art & Anghami especially to thank the medical community that’s doing a magnificent job all through the Middle East.