Le Mall – Take her to the game

“Who’s that cutie running with the ball? I love his hair!” is just one of the helpful comments women make every four years when forced to become at least marginally interested in football and the World Cup – a time when they lose their men to the beautiful game. Armed with that insight and with football fever rampant in the JWT Beirut office, the agency had fun toying around with ideas and perceptions that would become the Le Mall Fifa campaign.
The campaign plays on women’s perceived cluelessness about football, which the agency hopes will help Le Mall avoid the usual World Cup advertising clutter. The print campaign also allows JWT Beirut to reconcile a brand that celebrates i 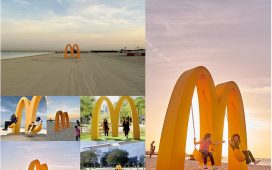