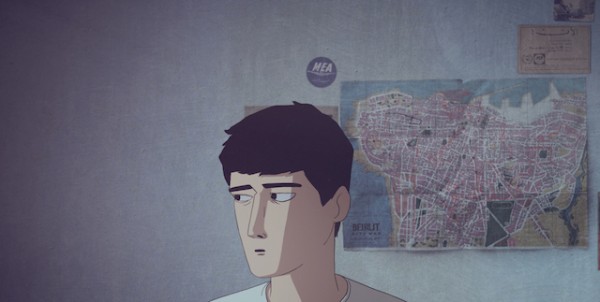 Director Ely Dagher’s Waves ’98 is the first Lebanese film to compete in the official competition at Cannes since 1991. Iain Akerman caught up with him to talk Beirut and artistic inspiration

Ely Dagher has stopped questioning the infinite variables of life. “I can’t think of anything apart from the film,” he admits with a laugh. “All I can think of is Cannes.”

For the Brussels-based Lebanese director and visual artist, Cannes represents film, not advertising, yet with a background in branding, illustration and design, he straddles both worlds. It is on the Côte d’Azur that his short film, Waves ’98, will have its world premiere at the Cannes International Film Festival, an event that will, in all likelihood, launch Dagher’s star.

An artistic exploration of the director’s relationship with Beirut, the film is the end result of two years of hard graft and contemplation and a surrealist blend of multiple styles of animation. “After putting so much effort into it I’m just happy the film’s getting the platform I think it deserves,” says Dagher with a muted but discernible sense of pride. “So people can actually see it. Otherwise, what’s the point?”

In the running for the Palme d’Or in the official short film selection, you have to turn the clock back three or four years to discover where it all began. Although he has said that he wrote the script on a sunny afternoon in Berlin, it is his departure from his home city and his subsequent to-ing and fro-ing from Europe that planted the film’s first seeds.

“I left Beirut in 2009 to do my masters in London and since then I’ve been travelling a lot and working commercially,” says Dagher. “At some point, every month I’d travel back and forth between Beirut and Brussels and the idea to work on the film actually came from a personal place in a way – that experience of trying to fit back into life in Beirut. Because I was going so often but I wasn’t really living there and I wasn’t really living in Brussels either, I was in this weird in-between place.

“Like a lot of Lebanese people, I have this sort of love and hate relationship with living in Beirut and in Lebanon. I was struggling with the fact that when you live in Beirut you end up living in some kind of social sphere, or social bubble, which is pretty disconnected from the region and everything else that is happening, otherwise you can’t really live there with all the crap that’s going on. So it was about me going back into that bubble, which was strange every time, but I did kind of come to a resolution while working on the film, which made me feel more comfortable. It’s nothing concrete that I can tell you, but I feel better.”

“Because I had two years to think about it. The character and the narrative – the way it unfolds in the film – are directly related to my feelings towards living in Beirut. So when I wrote the script and I started working on the animatic and the sketches and everything, I still didn’t have an ending. I didn’t really know what I wanted my character to do at the end because I needed to figure out first myself what I would do, or what my take on the thing would be. And that actually took a really long time. I was already six months into production before I decided on the ending.”

Set between Beirut’s post-war climate of recovery and the city’s current sense of despair and uncertainty, Waves ’98 tells the story of Omar, a teenager whose daily life is dominated by the mundane. Having never visited parts of the ‘segregated’ city, he spends much of his time gazing out at Beirut from his school’s rooftop, until an intense beaming light “shining through the greyness of the city’s landscape” lures him to venture into the city’s depths.

What does the light represent? How does it relate to the director’s own relationship with Beirut, and what role does memory play in his perception of the present?

Dagher has said previously that there is no message within the film as such, just a central reflection that portrays his feelings. What that central reflection is, or how it is represented stylistically in the film, will only become clear to audiences in Cannes this week. For now, Dagher is tight-lipped.

“I can’t really tell you much more because it would give everything away,” he says with an apologetic laugh. “But I can tell you that, let’s say… no, no I can’t tell you.”

He continues to laugh.

“Stylistically, going into this project it was important that the film would be able to reach a wide audience of people who would connect and identify with the film, and I know that animation is not everyone’s cup of tea. My focus in terms of the feel and look of the film was to try and reach an engaging and encompassing experience that has the ability to draw the audience in.

“I’m kind of a particular case in that I never really studied animation properly, so I kind of come up with my own solutions for things,” he adds. “The difference between my film and other animated films is that I use less of a, let’s say, language of animation, and more live action in terms of editing. There’s a lot of photography in the film and I spent a lot of time documenting the city, taking shots of buildings and landscapes, and there’s even some footage in there too. A lot is hand drawn, but there are many different layers. I’m also a perfectionist. If I need to show Beirut as a city and I want to show it as authentic in terms of its messiness and chaos, then I’m going to use photographs. Not because it’s easier, but because I think that’s the best way to represent the city and the landscape.”

Part narrative short, part visual essay, Waves ’98 is the first Lebanese film to compete in the official competition at Cannes since 1991. In that year, Maroun Baghdadi’s Hors La Vie won the Jury Prize, although other directors, including Nadine Labaki and Danielle Arbid, have screened their films at the festival in recent years.

If Dagher wasn’t feeling the weight of expectation before, he is now, with the entirety of his time focussed on preparation for the film’s world premiere in Cannes and the chance of a Short Film Palme d’Or on 24 May. After that will come questions of premieres in North America and possibly the Middle East, although the lifespan of a short film is limited and a cinema release is unlikely.

Although Dagher’s profile has risen due to the film’s acceptance at Cannes (it is one of only nine narrative shorts chosen from 4,550 submissions), his work as a director and a visual artist has been supplemented over the years by commercial work in the fields of branding and design, illustration, animation and video production. In the past he has worked with numerous advertising agencies and edited music videos for the likes of Mashrou’ Leila and Yasmine Hamdan, although the previous two years were spent working entirely on Waves ’98 thanks to funding from the Arab Fund for Arts and Culture and the Doha Film Institute.

“When I first studied illustration and graphics it was within an advertising school, so I started off in that circle,” says Dagher, who has an MA in new media and contemporary art studies from Goldsmiths College in London. “I’m not a big fan of it, but I’m at peace with it let’s say. The way I function for my personal projects, however, is different and my work is often an intervention on something that’s happening, or some kind of reaction to something. Which is why contemporary art from Lebanon speaks to me more than any other art form, mainly because of the content. It tends to be socially conscious and has more to say, which I can identify with, or emphasise with.

“A lot of my inspiration comes from writing, especially that of the Argentinian writer [Jorge Luis] Borges,” adds the 29-year-old, who founded his own company, BeaverAndBeaver, in 2010. “What inspires me in his work, or in the work of David Lynch, is not the visual aspect of it or even the words, but the way they tell stories. It’s also a lot about deconstructing things, about working with time and with layers. They have such freedom of structure and elements that are open to interpretation, which is not as obvious when you’re creating images or film. It’s not a direct inspiration that I applied in Waves ’98, but rather an open deconstructed approach in my work in general.”

His work is layered, frequently follows non-linear narratives, and is eclectic, with Waves ’98 including elements of photography, film, anime and computerised graphics. He also plays with surrealism, science fiction and the occult, while sound was of paramount importance in Waves ’98, says Dagher.

“There are two parts of the film that are very musical and the sound is really important. Initially, when I wrote those parts I wrote them with the sound in mind and the way it would be edited and everything. It was a whole package that I imagined. Also, because in animation you have to do the editing before you start the actual production – you do the drawings, you put them all together, you do the edit, and then you start producing the actual scenes – the way it is edited is tightly connected to the score. So music is very important. And I’m always interrogating things. Not just with this film, but in general.

Do you ever stop interrogating?

“Because it’s just so rich and vibrant. Just walking on the streets and avoiding being hit by a car, even if annoying, is stimulating on its own. I grew up in a scarred Beirut that was trying to re-build itself, while at the same time fighting to preserve its essence. It is extremely fragile and extremely aggressive, very beautiful, but also very ugly in many ways. It’s a city of immense clashes, and I love it.”

* This article was originally published in the print edition on 17 May, prior to Dagher winning the short film Palme d’Or