DDB Dubai: where did it all go so right?

The previously average DDB Dubai has been this year’s agency success story. What lessons can the industry at large learn from its transformation, asks Seyoan Vela 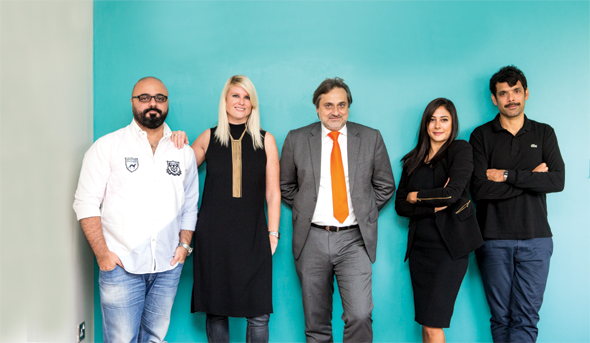 It is said network agencies are like supertankers. Big and slow, they take time to change direction. It is rare for any to suddenly have a new lease of life – Grey in New York and London being the most noticeable exceptions of recent times.

In the Middle East and North Africa region in the last couple of years, there have been agencies that have hit the headlines (Leo Burnett Beirut, JWT Cairo, Ogilvy, BBDO and FP7 spring to mind) but these were well-known agencies already doing well.

DDB Dubai, on the other hand, has undergone a quiet but dramatic transformation in the last 18 months. From plodding along to being turbo-charged. From Bruce Jenner to Caitlyn Jenner minus the fanfare. By every measurable metric, it is on a roll. Staff numbers up by nearly 40 per cent. Billings up significantly. Within the DDB network in EMEA it mainhas the highest rising staff satisfaction numbers. And when you talk to headhunters in Dubai they will tell you ‘it’s the agency everyone wants to join’. More tellingly, ‘it’s the agency no-one wants to leave’.

All of this comes against the backdrop of an impressive new business run that has included winning Porsche, Huawei, McDonald’s’ brand communication and food trust business, Dubai Parks & Resorts, Bollywood Park, Palazzo Versace Dubai, Sephora, Canon as well as becoming a roster agency for ADIB.

This is an even more remarkable turnaround given that the current DDB is in fact the relatively recent merger of three agencies: TD&A DDB, Brandcom and Gulf Promo Action DDB. Three cultures and three companies co-existing that, although they were doing good work, still seemed like the forgotten distant cousin of the DDB brand globally.

The transformation began soon after the arrival of Hubert Boulos as chief executive of DDB MENA in late 2013. Now, there are some senior ad execs who give you the feeling that they would happily leave the industry tomorrow and start selling carpets if there was more money in it. Boulos is not one of them. He is one of the most popular, passionate people in advertising in this region. A suave, thoughtful entertaining dolphin in a sea full of sharks – if you can imagine such a thing.

I caught up with Boulos and his team at their relatively new offices in Media City to see what lessons could be learnt from their success.

Have the vision to avoid vision statements

James Murphy, co-incidentally the CEO of Adam/Eve DDB London, was asked recently how his agency had created a culture and a vision that allowed them to win so many pitches and make great work. His answer was: “By making great work and winning pitches. I am suspicious of people who want to do workshops on the vision of their organisation and come up with agency brand statements. They’re usually the people who can’t create or make anything with vision for clients. We express our vision in the work that leaves the agency every day.”

Boulos agrees. His team have just worked hard and got on with it. They concentrate on doing the best for their clients today. The media landscape may be changing, and they are well aware of that, but they have embraced the ‘here and now’. Tomorrow after all is another day and who knows what will happen next year.

Believe in your people

Arsène Wenger, the Arsenal manager – whenever asked about his reluctance to splash the cash on new players – constantly refers to the concept of cohesion. If you look at successful teams such as Barcelona and Bayern Munich they have a core of players who have played together for years. Boulos admits that after he arrived he actually made very few changes. “When I came I realised there were no fundamental issues. I talked to clients and they loved the agency. They loved the people. But other clients didn’t know about us. It was the age-old advertising problem of being a well-kept secret. I just had to let our good people shine.” He let the players play, as Arsène would say.

Stability and consistency are too often undervalued. DDB has kept together its highly rated head of account management, Iris Minnema, its respected executive creative director Firas Medrows, its star creative director Zahir Mirza and others as part of the core team running the agency, and delivering on clients and pitches. They trust and respect each other. Even though they are not related. Hey, they’re not even from the same country. Clients ultimately want to work with people they like and who like each other. It’s surprising the number of agencies that fail to overcome these first two hurdles.

Be careful what you pitch for

Carolyn Carter, the one time head of Grey, always used to say that agencies are leaky buckets. For whatever reason business will slip away, be it global realignments or projects cancelled. Therefore you always have to be refilling the bucket with new business to maintain growth. Boulos makes no apologies for making new business his priority. “New business saves you. It gives you momentum,” he says. Boulos is something of a new business expert having been the new business director for Publicis in Paris. He candidly says: “I’ve failed more than anyone else. I’ve seen every possible mistake. The more you fail, the more you learn not what do.”

These are some of the tenets DDB Dubai lives by when it comes to pitching. “The number of pitches you can do is limited so we spend more time rejecting pitches than accepting them. We reject pitches with ridiculous deadlines. We reject pitches we think are fake because they are just a procurement exercise or have been pre-decided. We reject pitches when we don’t like the clients. We have an extensive blacklist of clients we know are time wasters. We only work with clients we like. We keep teams small with single-minded leadership and let the passion of our people come out.”

It is interesting because most agencies will evaluate the creative opportunity or the money and hope for both. DDB Dubai is confident enough to feel it can make it a creative opportunity and it reduces the finance down to a hygiene factor rather than the driver. In short, it knows that new business should be the lifeblood of an agency. Not its poison.

Networks and holding companies. You work for them but they can work for you

The accepted theory is that networks limit an individual agency’s agility. That holding companies are suffocating. But DDB Dubai has made the DDB brand work for them. As Boulos points out: “An international and historical reel that includes all those great VW ads, Budweiser’s ‘Wassup’ and John Lewis is always going to be impressive. DDB globally has a strong creative culture and was set up to be a challenger brand. Here in Dubai we have a start-up mentality but benefit from the credibility of being part of a global network and the second biggest holding company. The DDB model has always been multi-local – expecting its local offices to have strong local clients as opposed to relying on networked business and for its agencies to be famous in their own markets. This has allowed us to remain agile. The new challenge is that the Dubai offices of network agencies now have to be good enough to compete with offices and rival agencies from anywhere in the world and not just agencies in the Mena region.”

Under promise. Over deliver. Not the other way round

Managing expectations was the mantra advertising used to live by. DDB still tries to stay true to this way of operating. Be it with clients, employees and new hires. As Medrows says: “We don’t just tell people what they want to hear. That we’ll spend all day doing award-winning work. Of course we want to do well in awards, but we make sure people have an understanding of what the day-to-day involves because we are trying to make better work every day. We may have some great brands but to do that in an integrated way across many touch points is a challenge. It’s a lot of hard work but being truthful also leads to zero turnover.”

Finally… there is no secret sauce

“Do the simple things well. Avoid doing stupid things,” is Boulos’s pithy summary of DDB’s successful formula. Now really, how hard can that be?