Connecting digitally with youth in the Maghreb

The identity of the Maghreb region is one often called into question. Viewed as neither truly ‘African’ nor ‘Arab’, the former French colonies of Morocco, Tunisia and Algeria may exist geographically in the ‘North Africa’ of MENA, but are still regarded as somewhat ‘other’ – both linguistically and culturally – by the Middle East, despite their shared language and religion. Unsurprisingly, the region remains a low priority for adspend and investment. However, signs suggest the industry may finally be taking notice.

Dentsu Aegis Network recently conducted a major research project looking at the region’s youth – specifically those aged between 15 and 19. Of the Maghreb’s swelling population of 87 million people, youth form an enormous portion; roughly a quarter are aged under 30, and about 7.5 per cent are in Dentsu Aegis’ chosen demographic. “The reason we focused on the particular age bracket of 15-19 years old is to capture certain factors that influence this transitional phase of life,” says the research report.

“It is important to understand what these teens are thinking, what they like and what their lives are like so we can better communicate with them and appeal to the game changers of modern Maghreb.” 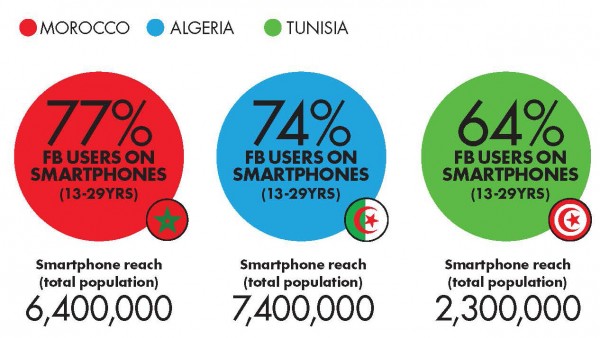 Raed Omar, head of research at Dentsu Aegis Network MENA, says: “Despite, or perhaps because of, the immense disruption that has taken place in these markets over recent years, there is a significant data gap when it comes to media consumption and digital behaviour of consumers. Unlike main MENA markets, Maghreb does not enjoy the same attention from a media and marketing perspective. Despite their large population sizes and strong connections in both trade and culture with European countries, there is still a perception of these states being less developed. Naturally, this affects the amount and accuracy of data available, especially for the teenage and young adult demographic.”

Mounir Chkouri, deputy managing director at FP7 Casablanca, agrees: “Maghreb is usually not the first priority when it comes to investment in media, especially in case of budget cuts.”

“Global wins over regional, and over the potential of countries and their possible expected outcome. While there is a huge potential, brands are only scratching the surface of it,” he says. “Many opportunities are available in the Maghreb, as many factors coincide to provide a breeding ground for digital exposure and further exponential growth. The younger generation is more prominent in the age structure of the Maghreb region, which is a good sign regarding the consumption of digital content in the region.”

There is good reason marketing in the region is underdeveloped. Economic, political and social instability across the region pose an uncertain future for the region’s teenagers – and perhaps contribute to the industry’s apparent lack of interest. Tunisia, for example, has never truly recovered from the turmoil of the 2011 Arab Spring, and the massacre of 38 Europeans in a beach resort near Sousse in June last year has crippled the country’s vital tourism industry. Algeria has suffered heavily from the effects of the global oil price plunge.

In both countries, youth unemployment is high and graduate prospects are low. Though largely unscathed by the turbulence of 2011, Morocco’s economic progress remains tied to its largely rain-fed agricultural industry, and is subject to sudden surges followed by deep dips. But things are changing.

“The Arab Spring just five years ago affected consumer confidence and financial security, with high unemployment and rising costs of living created frustration and a wave of anger in Tunisia, but with political and social repercussions elsewhere,” says Omar. “This, combined with a global financial crisis, political turmoil and widespread revolutions, has led to unprecedented change across North Africa.

“The growth of mobile networks, adoption of smartphones, the penetration of high-speed internet access and the rise of social media – and with it an ability for previously isolated groups to produce their own content and share it with the masses – paved the way for the historic and revolutionary events that took place triggered by a youth-based citizen awakening. The youth were – and still are – at the heart of these movements, driving forward political and social transformations as they call for social justice and freedom.

“Not only is the Generation Z of the Maghreb digitally savvy, they are also used to technology, digital and social media being a liberator for them and giving them a voice. Arguably they have been and will continue to be more influential on the world around them compared with Generation Y (millennials). As marketers, it is vital for us to understand this group of individuals whose influence will continue to shape a key part of the MENA region.”

Across the whole Middle East, the biggest digital game changer has been the smartphone. This year’s Arab Youth Survey, in which PR agency Asda’a Burson Marsteller examined the behaviour of 18- to 24-year-olds, found smartphone ownership is 85 per cent in Algeria, 90 per cent in Tunisia and 97 per cent in Morocco. Smartphone usage in these countries also falls in line with other Arab youth; social networking, particularly on Facebook, is a popular pastime, with roughly 80 per cent checking their accounts on a regular basis.

YouTube watch time across all markets is growing, and gaming has become the most popular hobby among the teenage market, according to Dentsu Aegis.

“There is more of a ‘lean-back’ attitude to social media as most of their virtual activities include watching content, liking posts, or sharing content, compared with a more ‘lean-in’ approach: creating, customising or uploading content,” says Omar. “Pictures, funny videos and images, status updates and news are the most commonly shared content across Maghreb teens. It is also no surprise that they embrace the expressive side of social media with nearly half in Morocco and Algeria agreeing with the premise ‘you are what you share’. This rises to two-thirds in Tunisia, perhaps owing to how deeply connected to the political and social climate Tunisian teenagers are.”

As in the rest of the world, television also plays a vital role in Maghreb youths’ lives. It is their main source of news, according to the Arab Youth Survey, and a key form of in-home entertainment, especially pan-Arab channels such as MBC2 and MBC Action.

However, Omar says: “As expected, their smartphones offer a far more rewarding and relevant engagement experience than TV. They have become the new priority and new addiction as is the case with the majority of 15-19 year olds in developed or developing countries. Many feel that the internet gives them the opportunity to freely express their opinion and makes them feel in control.” 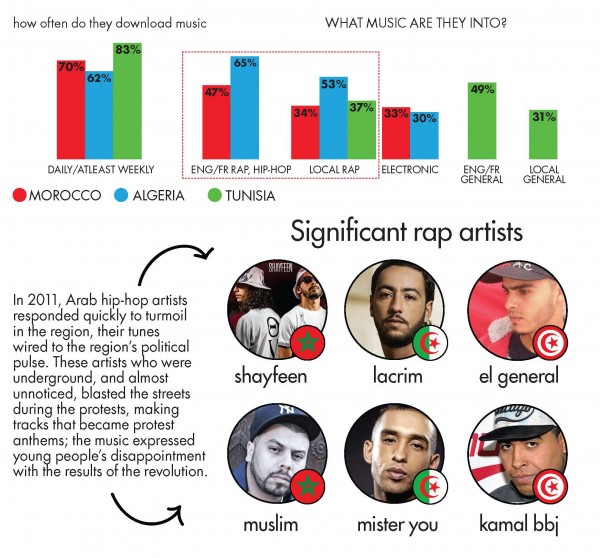 At the core of these youths’ social spheres is music; Omar calls it the “Number 1 passion across all markets”. On average , he says, 72 per cent of teenagers download new music either daily or weekly.

“For decades, music has been a comfortable ally in marketing, whether we think about a TV ad soundtrack, content or influencer partnership or prize incentive,” he adds. “What makes the typical and obvious task of ‘ensuring music is part of the communications DNA’ a bit trickier in Maghreb is the universal preference of rap and hip-hop – whether it’s English, US, French or even locally produced. Rap music wired the region’s political pulse during the Arab Spring as underground artists blasted beats to the streets during protests and made tracks that soon became protest anthems.

“However, the background from which this genre gained traction, as well as the raw, powerful and emotionally inspired capabilities
of the artists themselves, means that it’s hard to match them in a creative sense.

“Brands attempting to form a closer association with the culture of music will struggle to feel authentic and credible. Advertisers seeking to connect with Maghreb youth will need to tailor their messaging to a complex and subtle audience. “With access to the right research and data,”  he adds, “brands have a much better chance of standing out from the cluster of traditional advertising, which these kids  have become immune to, and resonate with an increasingly influential target audience.”